With the arrival of the new Indiana Jones movie quickly (although not quickly enough) approaching, I thought i would steer away from paleo for a moment for some fun Indy trivia:

Actor Dan Aykroyd has a cameo role in the Temple of Doom. Indiana Jones meets his character at the airport at the end of the Shanghai car chase. You won't be able to get a good look at his face but you'll certainly recognize his voice....

And for a few more Star Wars/Indiana Jones tie-ins:

The scene where Indy threatens to blow up the Ark with a bazooka, as it is being carried through a canyon, was filmed in the exact same canyon in Tunisia used in Star Wars Episode IV: A New Hope when R2-D2 was zapped and stolen by Jawas.

Jock's airplane at the beginning of the film has the registration number 'OB-CPO', referring to characters Obi-Wan Kenobi and C-3PO from the Star Wars films.

Probably the most well known: The hieroglyphics in the Well of Souls include engravings of R2-D2 and C-3PO. They can be seen on a post to the right of Indy and Sallah as they remove the Ark (to the left in this picture).

The club at the beginning is called "Club Obi Wan", a reference to Star Wars character Obi-Wan Kenobi.


And check out the very cool new poster for Indiana Jones and the Kingdom of the Crystal Skull designed by Drew Struzan! 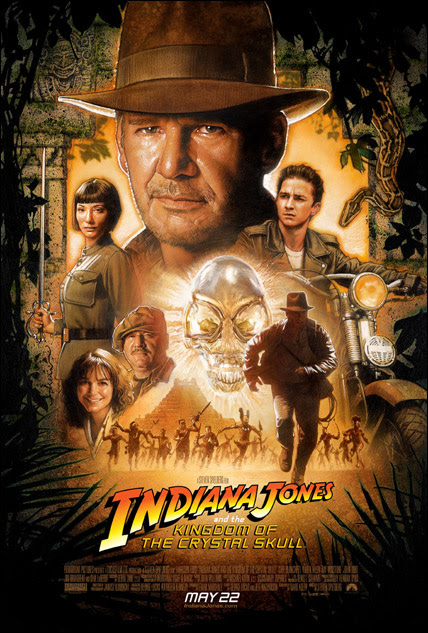 (What, no mention of the "gun vs. blade" scene in Raiders being a last-minute ad lib by a dysentery-afflicted Harrison Ford?)

LOL I never caught that one!!