I really enjoyed this program! I guess it originally aired last year, but it was during the field season, and I missed it. It was pretty cool to see some cave paleo in Australia taking place. Growing up in Oklahoma and Arkansas I often heard stories about bones in caves. My first 'dig' I ever went on was in a cave near Jasper, Arkansas. Dr. Leo Carson

Davis took me out when I was probably 14 or 15 and let me work on a Pleistocene sinkhole deposit with him (Picture to the right - scary!). He had me working in a 6 foot deep hole, where he would lower a bucket to me to fill up. I still remember seeing a tiny rodent jaw in the wall of the hole. Very cool for my first dig! Once I got in school I got to know people like Blaine Schubert who had done some cave paleo in our area. But I regress.....

I honestly do not know a huge amount about Australian fossils, but this was a pretty cool glimpse. In oder to learn more about this site, I took a chance and emailed Dr. John Long at Museum Victoria who the documentary follows. I was thrilled to have him respond in less than an hour to my email. He sent along a Nature article (Jan. 2007: "An arid-adapted middle Pleistocene vertebrate fauna from south-central Australia") on the finds for my further edification (upon my request). He also told me that Gavin Prideaux at Flinders University has taken over the project and has several papers on the Nullarbor caves fauna in the works. I am especially excited to see the new kangaroo paper! I hope to get these papers read soon and post something about them here.

A description of the show:
"NOVA takes viewers to the stark Australian outback in search of the elusive bones of one of the world's most bizarre prehistoric creatures—a giant predatory marsupial called Thylacoleo. Australia's leading paleontologists endure extreme weather, treacherous drops into a deep cavern, and the threat of fossil poachers as they launch a daring expedition to find the rare megabeast.

During the Ice Age a million or more years ago, Australia was home to a zoo of extraordinary giant animals, including eight-foot-tall kangaroos, wombats the size of hippos, snakes three feet in diameter, and a horned tortoise as big as a Volkswagen. (For a diorama-like gallery of some of these creatures, see Australia's Vanished Beasts.) But none was quite as bizarre or fearsome as Thylacoleo,

the meat-eating marsupial lion. Pound for pound, this creature had the most powerful bite of any mammal, living or extinct—in fact, its bite was equal to that of a much bigger African lion today. But even though it was the king of ancient Australian predators, Thylacoleo was eventually toppled from its throne, dying out along with all the rest of the outsized beasts. What happened to drive so many extraordinary megabeasts into oblivion?

In "Bone Diggers," NOVA joins the Australian expedition to retrieve a rare intact skeleton of the meat-eating marsupial. The analysis of its bones throws new light on Thylacoleo's many peculiarities, notably the question of how it attacked its prey (see Anatomy of Thylacoleo). And, finally, the show digs into the mystery of what finally overwhelmed the giant Ice Age creatures and whether early human hunters were responsible. 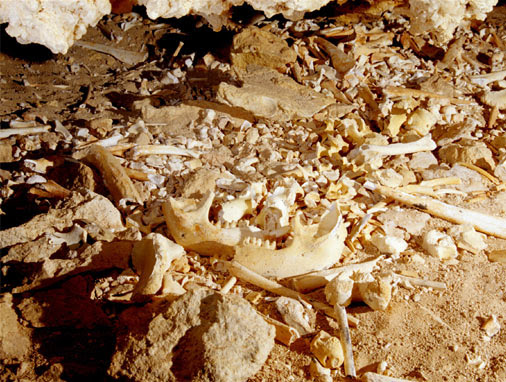 The adventure begins when paleontologist John Long receives an e-mail from an amateur explorer with a tantalizing photo attached. The photo shows an apparently intact skeleton of Thylacoleo in the depths of a remote cave in the outback. Since no one has found a complete skeleton before, the discovery would be a paleontological milestone. So Long and his colleagues at the Western Australian Museum set out on an arduous expedition, crossing the desolate Nullarbor Plain to pinpoint the remote cave shown in the e-mail. Over the next three weeks, exploring the dangerous recesses of the ancient cavern, the team finds a remarkable trove of fossil remains—including several astonishingly well-preserved Thylacoleo skeletons together with previously unknown species of giant kangaroo.

Back in Perth, the team begins studying the bones and building up a picture of the marsupial lion's unique anatomy and behavior. Although most marsupials such as kangaroos and koalas are herbivores, Thylacoleo was something completely different—a fearsome predator with pincer-like front teeth and a slashing front claw on its thumb. Yet it wasn't built like a lion; with its low-slung body and short legs, it could never have chased its prey at high speed. Instead, it probably waited in ambush for its next meal, perhaps dropping from trees.

In the final scenes of "Bone Diggers," NOVA investigates the mystery of Thylacoleo's disappearance and that of all the other Australian giants. A fierce controversy turns on when exactly this continent-wide extinction occurred. The debate is split between advocates for a late date at the cold climax of the Ice Age some 30,000 years ago, when climate stresses would have been particularly severe. The competing camp claims the extinction was much earlier, around 50,000 years ago, when the climate was milder and the first humans arrived in Australia. While it's unlikely that humans could have directly over-hunted all the huge animals, Aboriginal hunters may well have set fires that gradually changed the profile of vegetation in the outback, making it harder for Thylacoleo's prey to get by. Although it was the king of beasts, Thylacoleo was probably vulnerable to shifts in the food chain. (For more on this mystery, see The Extinction Enigma.)

Whichever theory is correct, the riddle has implications that stretch beyond Australia. Creatures like woolly mammoths, mastodons, cave bears, giant sloths, and many other species all died out on other continents as the Ice Age ended and human populations expanded. The jury is out on just how big a role human predation played both in Australia and on the worldwide stage.

From the gripping discovery in the desert cavern to the detective work in the lab, "Bone Diggers" takes NOVA viewers on a paleontological "CSI," unraveling a prehistoric puzzle that has eluded paleontologists for a century."

Read more about "Evolution Down Under"

Email ThisBlogThis!Share to TwitterShare to FacebookShare to Pinterest
Labels: NOVA

Cool beans...speaking of Blaine.
You're not going to goto this are you?

http://www.etsu.edu/grayfossilsite/News/meeting.asp
Perhaps I should have pasted this...

Nope, wish I could. That month is going to be a mess for me between moving then turning around and having to go to Arkansas to help my dad move.
Are you going? Are you going to go to the Geo Banquet in Fayetteville on May 1?