I met Dr. Davis in person around the summer of 1994. I was 15 years old and had an interest in vertebrate paleontology. His name had been passed on to me as the ONLY Member of the Society of Vertebrate Paleontology living in Arkansas around 1993. I wrote him a letter, and he wrote back, and we became pen pals. It was great fun for me to have someone to talk to pre-email, and he would send me postcards and letters from all his adventures, journal articles, newspaper clippings, and book about VP science making the news, and occasionally would send invertebrate fossils to identify, which I would mail back, and he would let me know how I was doing.  The summer of 1994 he invited my mom, sister, and I up to Peccary Cave to help excavate for an afternoon (I also met Ken Ball at this dig). It was great fun, and I remember climbing over a pile of guano in the cave, trying to not bump the sleeping bats on the roof, in order to get to the pit where he was digging. As a kid, this pit looked deep! It was a dark shaft with a ladder, which I climbed down. An auto light was lowered down so I could see, and the ladder was pulled out of the pit. They would lower a bucket on a string which I would fill with sediment that we later would screen wash for fossils by the nearby creek. This was my first fossil excavation experience, and it was very memorable and fun!

When I was in college at the University of Arkansas, he was my sponsor to the Society of Vertebrate Paleontology, which I joined in 2000. Dr. Davis helped me with my undergraduate senior thesis on Arkansaurus fridayi, and was my mentor for the 2003 Arkansas Undergraduate Research Conference Annual Meeting where I first presented on these fossils. He had introduced me to Mr. Joe Friday who discovered the fossils and met me in the field to show me where they had been discovered and for some prospecting. We kept in touch as I left for grad school, and as I moved around to my various jobs over the years, always sending letters and postcards, which I still cherish. We would occasionally see each other at Society of Vertebrate Paleontology meetings, and it was always great to catch up. Without his early encouragement and mentorship, I know I would not be where I am now in my career. His kindness has left a mark on me, and I remember it every time I receive a letter from a kid who also loves fossils, and I make sure to write them back and continue to pass on the mentorship and support that I received from Dr. Davis. I owe him so much and very much appreciate the time he took on an enthusiastic Arkansas kid who had fallen in love with fossils. He helped open up the world of paleontology for me, and his support and friendship has meant the world to me over these years. I will always remember him fondly and continue to pass down the mentorship he shared with me to our next generation of young scientists. 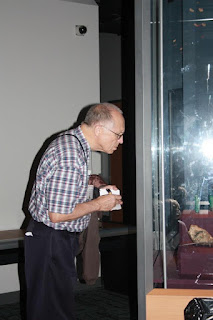 © ReBecca K. Hunt-Foster
Posted by ReBecca Hunt-Foster at 10:15 AM No comments: