Dusting off the old blog to help out a good cause. Below is a message from the good folks at Pipestone Creek Dinosaur Initiative (PCDI). They have started a crowd-funding campaign in order to raise money to build the The Philip J. Currie Dinosaur Museum. Please read their press release below and think of contributing!

Hope everyone is well out there! ~ ReBecca

The PCDI launches a crowd-funding campaign on Friday


Bring in the crowds! This Friday, Oct. 12, the Pipestone Creek Dinosaur Initiative (PCDI) is launching a crowd-funding campaign to help build the Philip J. Currie Dinosaur Museum. Hosted by Indiegogo.com, the Initiative is aiming to raise $1,000,000 in 120 days.

For those not familiar with crowd-funding, this is a relatively new, fun and fast-paced way to raise funds online for projects of any size and scope.

The premise is simple. The site gives projects space to create an online profile outlining their mission. Would-be donors can go online to read about the project, explore the positive impacts it will have, check out a photo gallery, watch videos and generally decide if they’re interested in contributing to its success. Donors can then donate online, through a secure credit card payment or Paypal ™, similar to online shopping.

The Initiative’s campaign launches this Friday at Indiegogo.com/curriemuseum.

Donations start at a minimum $10 and can be any amount thereafter. Gifts called ‘perks’ are provided according to the size of donation. These range from a museum pin all the way up to a naming opportunity on a room or gallery in the museum. Other perks include a limited edition print by acclaimed palaeo-artist Julius Csotonyi and an autographed book by Dr. Philip Currie. The entire list of perks is available at the online campaign profile.

“This campaign already has a lot of excitement surrounding it. We’re urging all community members to go and donate,” said PCDI executive director Brian Brake, “Every bit makes a difference when it’s a crowd.”

Indiegogo.com is a well-respected crowd-funding host site. Some may recall the story of Karen Klein, the bus monitor in Greece, New York who was videoed this past July as she was verbally harassed by some youth on a bus. After the video was made public, a Good Samaritan created a profile for Klein on Indiegogo.com to raise money to give her a vacation. For a $5,000 goal, over $720,000 was raised.

“One of the most important things is to spread this around the world,” said Brake. “We’re asking everyone to put it on their Facebook and Twitter accounts and email it out to their entire contact list. We have 120 days to hit our goal; we need people to move quickly.”

The Philip J. Currie Museum currently has $17.4 million raised of $30 million. A sponsorship program engaging the local municipalities to bring that figure up to $27.4 million is currently underway. To complete the funding, a naming opportunities sponsorship program is also in progress, offering significant donors the chance to have their name affixed to a room, display or area in the museum. The projected timeline for the museum’s creation includes going to tender in January 2013, breaking ground in April 2013 and hosting a grand opening in June 2014.

Don’t forget to view the campaign profile at Indiegogo.com/curriemuseum!

The Philip J. Currie Dinosaur Museum will preserve and display the unique fossils of northwestern
Alberta and serve as a regional centre of excellence for tourism, science, heritage preservation and
education. Major outcomes of the proposed cultural and scientific institution include enhanced economic
and cultural development and increased knowledge of the Cretaceous geology that forms the bedrock of
Alberta’s oil and gas industry. The museum, with a footprint of 41,000 square feet, will be located on a
10-acre site in the Town of Wembley, Alberta, on the highway to Alaska. The facility will have a
significant positive impact on the local area’s learning opportunities in the fields of culture, heritage and
science through its interactive displays, resident experts and curriculum-based educational programs.
The museum will house two classrooms, a 64-seat theatre, restaurant with drive-thru service, gift shop,
boardroom, tourism visitor services, 12,000 square feet of interactive and interpretive displays, a scientific
laboratory, fossil curatorial space and a 120-vehicle parking lot. The Pipestone Creek Dinosaur Initiative
is the omnibus term for the project team tasked with the realization of the museum.

The Field Paleontologist is responsible for assisting the Tribal Paleontologist in managing the field staff and ensuring that the field paleontology program operates efficiently.  The incumbent will be expected to supervise several field assistants and/or volunteers of varying skill and knowledge levels, know and teach various field paleontology methods and techniques, and be able to keep good field notes and documentation of fossil localities.  During times of inclement weather, work will be temporarily moved to the Paleontology Lab in Fort Yates, ND where the incumbent will assist in regular lab work including, fossil preparation and molding and casting.

Qualifications:
Applicants must have a Master’s degree in paleontology (preferred) or Bachelor’s degree in geology or related field with paleontology field work experience.  Must have knowledge of geological and paleontological concepts, methods and techniques.  Must be able to lift heavy loads and work under adverse conditions typical for the badlands of South Dakota.  Must possess a valid driver’s license and be able to provide own transportation to and from the field camp.  Salary commensurate with experience.

I am interested in obtaining some used/torn/brittle/old/new/or no-longer-needed geologic maps (or even topos). Does anyone have any they would like to get rid of or see given a second life? Something gathering dust in your lab or shoved in a corner? Just leave me a comment here or send me an email. Thanks!

Variation in the skull of Anchiceratops, a horned dinosaur from the Horseshoe Canyon Formation

Enjoy this video by my friend Jordan on is work with Anchiceratops:


Thanks to Tom H. for the heads up! 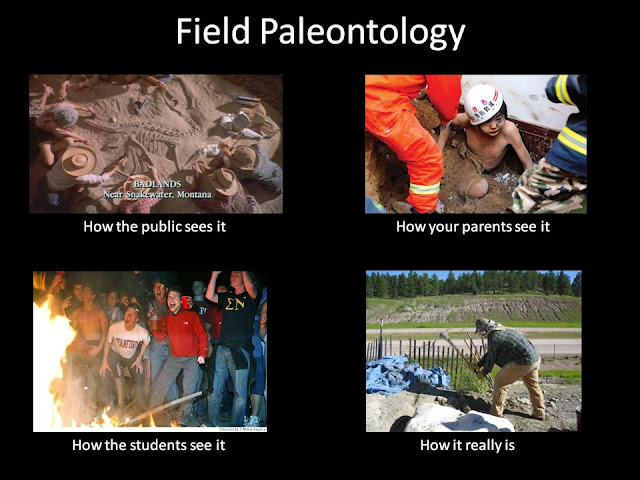 © Darrin Pagnac - you rock. Thanks Darrin
Posted by ReBecca Hunt-Foster at 2:52 PM 2 comments:

I hope everyone had a good day and remembered to celebrate the 374th birthday of Nicolas Steno. Google celebrated his birthday with a good doodle: 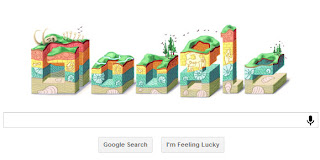 Thanks to Steve for the heads up on the doodle. © ReBecca K. Hunt-Foster
Posted by ReBecca Hunt-Foster at 6:00 PM No comments: