Not really art, but how often can you stand on the corner of the Jurassic and the Cretaceous?? 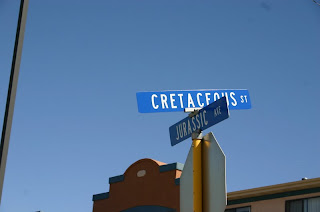 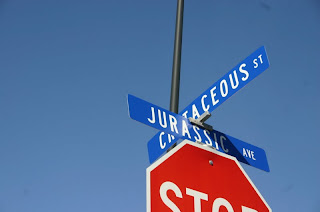 
Thanks to my aunt for the heads up! 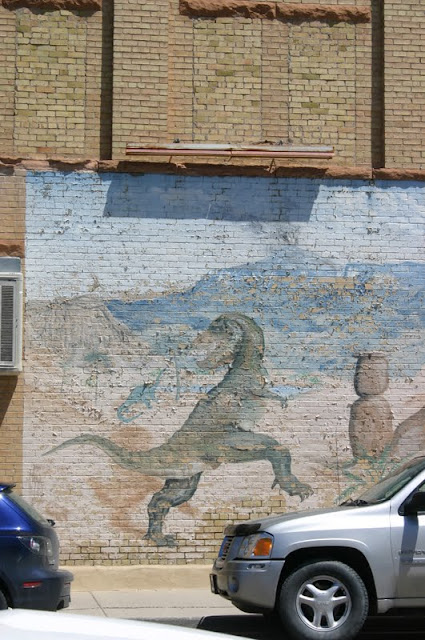 After a long battle against cancer, we have lost one of our own ....

Rest in Peace PaleoPatti
Services will be held at St Mathias Church in Bala Cynwyd at 11:00 AM on Wednesday.
Posted by ReBecca Hunt-Foster at 11:41 PM 5 comments: 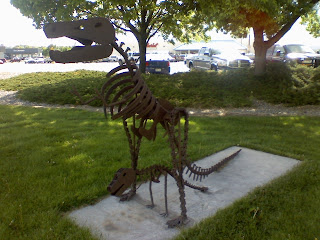 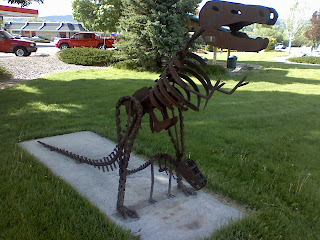 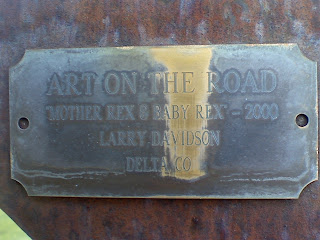 Posted by ReBecca Hunt-Foster at 12:30 AM No comments:

Grrrreta can be found in the Fruita City Circle. It was named by local school children in 2000 and she is decorated for Christmas with a giant Santa hat and the Grinch hanging out of her mouth. 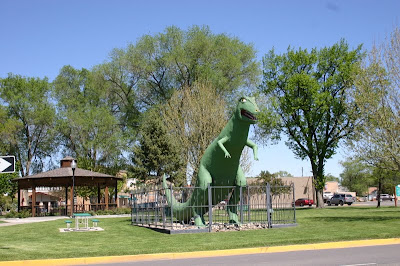 John and I have been continuing our research out at the Mygatt-Moore Quarry in western Colorado, and recently had a paper on one of our findings published in the Journal of Vertebrate Paleontology in May.


We work each summer at this quarry under a paleontological permit from the Bureau of Land Management, which is located in the McInnis Canyons National Conservation Area (NCA), near the Colorado/Utah state line. “The national significance of the area's paleontological resources is one of the many reasons this special place was designated as a National Conservation Area,” said Katie Stevens, NCA Manager for the BLM’s Grand Junction Field Office. “With experts like John and ReBecca working in these quarries, we can recover and share this exciting and important scientific information with the public.” John is currently working under a scientific grant from the BLM to better understand the extent of the quarry and the conditions that made it such an ideal location for preserving fossils [details].

The first specimen was located by Jim Kirkland and his expedition to the quarry in 1993 (MWC 1903). A expedition member, Dan Libecap, discovered the second specimen (MWC 5537) in 2003. Two of our museum volunteers, Kay Fredette and Ray Bley, uncovered the most recent specimen (MWC 6718) in 2008.

Two of the three specimens (MWC 6718 & 5537) are possibly from sauropods, and we attributed the third specimen to Dinosauria indeterminate (MWC 1993). The two possible sauropod specimens represent the first occurrence in the Morrison Formation of preserved sauropod skin associated with abundant nearby specimens of Apatosaurus. They also show how similar the general structure of skin patterns within known Morrison diplodocids are.


These discoveries were unique because the soft tissue associated with the skin was preserved as carbonaceous layers rather than as trace fossil impressions, yielding better information about skin pattern, scale size and scale shape. This discovery is is the sixth occurrence recovered from the Morrison Formation.

If you would like a PDF of this paper please contact me here or by email and I would be happy to share one with you. We plan for this paper to be the first of many that will be published over the next few years. Below is a complete bibliography of research from Mygatt-Moore Quarry that has been done to date (PDF's of select papers are also available):

© ReBecca K. Hunt-Foster
Posted by ReBecca Hunt-Foster at 11:58 AM No comments: 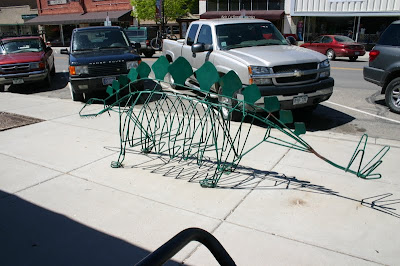 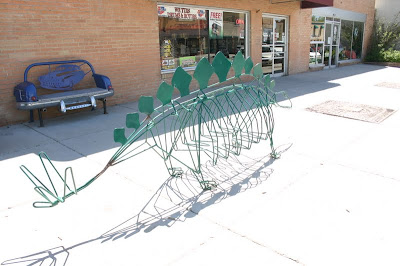 Looking for a job?

Check out PaleoJobs.com. They currently have a few postings up and it seems to be a website that is kept up to date. At this point it seems to be a bit heavy in the geology side of jobs (not all paleo jobs), but if some bio- or museum people (even though there is a separate museum specific job site) submitted job postings they were aware of, it would be a good resource for everyone. And, yes, there is a facebook and twitter page.

© ReBecca K. Hunt-Foster
Posted by ReBecca Hunt-Foster at 12:03 AM No comments: