Seitaad rises from the sands of time

This new dinosaur gets my vote for one of the coolest names of 2010! In tomorrow’s (March 24th) issue of PLoS ONE the new sauropodomorph Seitaad ruessi will be unveiled [you can read it now here]! Seitaad is derived from Seit’aad, a sand-desert monster from the Navajo (Diné) creation legend that swallowed its victims in sand dunes. The skeleton of Seitaad was found encased in a Jurassic sand dune (Navajo Formation) in the Comb Ridge area near Bluff, Utah (pictured below). While tracks are relatively common fossils found in the Navajo Sandstone, Segisaurus, a small coelophysoid (thropod, meat eater) discovered in Arizona, is the only other dinosaur body fossils known from the Navajo Sandstone at this time (Camp 1936; Carrano et al. 2005[as far as I know]). The species name, ruessi, is derived from Everett Ruess, famous young artist, poet, historian, and explorer who disappeared in southern Utah in 1934, and subject on this blog in the past. The name Seitaad ruessi is pronounced SAY-eet-AWD ROO-ess-EYE. There is a great interview with Mark Loewen, one of the studies authors, over at the Open Source Paleontologist! Be sure to check it out for some great details! 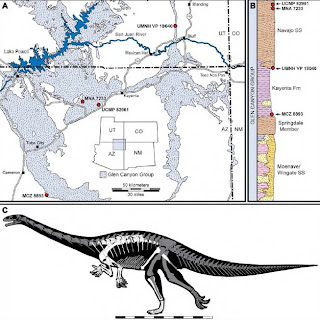 Location of Seitaad find and reconstruction of animal.
The official press release:

New Dinosaur from Utah’s Red Rocks
Plant-Eater Named for Vanished Explorer Everett Ruess
March 23, 2010 – Utah’s red rocks – world-famous attractions at numerous national parks, monuments and state parks – have yielded a rare skeleton of a new species of plant-eating dinosaur that lived 185 million years ago and may have been buried alive by a collapsing sand dune. The discovery confirms the widespread success of sauropodomorph dinosaurs during the Early Jurassic Period.
Until now, Utah’s red rocks were known only for a few scattered bones and dinosaur footprints. However, discovery of a remarkably preserved partial skeleton is being published in the March 24 edition of PLoS ONE, the online open-access journal produced by the Public Library of Science. 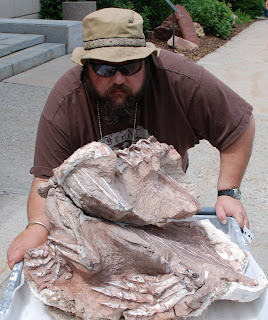 The study was conducted by Joseph Sertich, a former University of Utah master’s student and current Stony Brook University Ph.D. student, and Mark Loewen (pictured to left), a paleontologist at the Utah Museum of Natural History and instructor in the Department of Geology and Geophysics at the University of Utah.
The new dinosaur species is named Seitaad ruessi (SAY-eet-AWD ROO-ess-EYE), which is derived from the Navajo word, “Seit’aad,” a sand-desert monster from the Navajo (Diné) creation legend that swallowed its victims in sand dunes (the skeleton of Seitaad had been “swallowed” in a fossilized sand dune when it was discovered); and Ruess, after the artist, poet, naturalist and explorer Everett Ruess who mysteriously disappeared in the red rock country of southern Utah in 1934 at age 20.
Seitaad ruessi is part of a group of dinosaurs known as sauropodomorphs. Sauropodomorphs were distributed across the globe during the Early Jurassic, when all of the continents were still together in the supercontinent named Pangaea. Millions of years later, sauropodomorphs evolved into gigantic sauropods, long-necked plant eaters whose fossils are well known from elsewhere in Utah, including Dinosaur National Monument.
A Dinosaur Buried by the Dunes 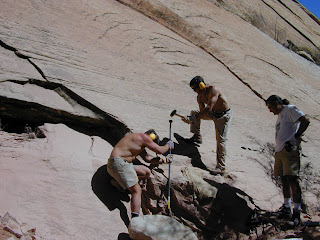 The skeleton of Seitaad was discovered protruding from the multicolored cliffs of Navajo Sandstone in 2004 by local historian and artist, Joe Pachak, while hiking in the Comb Ridge area near Bluff, Utah. His discovery, located just below an ancestral Puebloan (Anasazi) cliff-dwelling, was subsequently reported to the federal Bureau of Land Management (BLM) and the Utah Museum of Natural History. Museum paleontologists and crews excavated and collected the specimen in 2005 (picture to right, (left to right) Mike Getty, Josh Smith and Joe Gentry).
The beautifully preserved specimen includes most bones of the skeleton, except for the head, and parts of the neck and tail. Seitaad was found in fossilized sand dunes that were part of a vast desert that covered the region nearly 185 million years ago during the Jurassic Period. Research suggests that the animal was buried in a suddenly collapsing sand dune that engulfed the remains and stood them on their head. The missing parts of the skeleton were lost to erosion over the past thousand years, but were almost certainly visible when Native Americans lived on the cliff just above the skeleton. 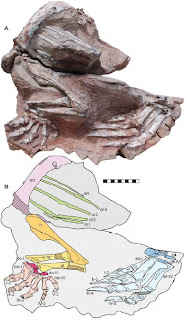 In life, the animal would have stood about 3 to 4 feet (about 1 meter) tall at the hips and was 10 to 15 feet (3 to 4.5 meters) long. It would have weighed approximately 150 to 200 pounds (70 to 90 kilograms), and could walk on two or four legs. Like its later gigantic relatives, Seitaad most likely ate plants.
Early sauropodomorphs, including Seitaad, had long necks and tails with small heads and leaf-shaped teeth, suggesting that they were specialized for an herbivorous (plant-eating) diet. These same traits were carried on in their much larger descendents, the sauropods. “Although Seitaad was preserved in a sand dune, this ancient desert must have included wetter areas with enough plants to support these smaller dinosaurs and other animals,” said Sertich. “Just like in deserts today, life would have been difficult in Utah’s ancient ‘sand sea.’”
According to Loewen, “We know from geologic evidence that seasonal rainstorms like today’s summer monsoons provided much of the moisture in this sand sea, filling ponds and other low spots between the sand dunes.”
The closest relatives of Seitaad are known from similar-aged rocks in South America and southern Africa. Other, less complete, fossils from northern Arizona hinted at the presence of sauropodomorphs like Seitaad, but none were complete enough to understand exactly what species was living in the American Southwest. The discovery of Seitaad confirms that this group of dinosaurs was extremely widespread and successful during the Early Jurassic, approximately 175 million to 200 million years ago.
Although the Navajo Sandstone is exposed all over Utah and Arizona, fossils are extremely rare and we have not yet learned much about the animals that lived in this giant desert. Other animals that lived in the Navajo Sandstone were all relatively small animals, including a carnivorous dinosaur, crocodile relatives and proto-mammals called tritylodonts. Even though Seitaad was quite small, it was likely the largest herbivore during this time period in southern Utah. “This new find suggests that there may be more dinosaurs yet to be discovered in these rocks,” said Sertich.
References:

Camp, C. 1936. A new type of small bipedal dinosaur from the Navajo sandstone of Arizona. University of California Publications, Bulletin of the Department of Geological Sciences 24: 39-56.
Carrano, M.T, Hutchinson, J.R, and Sampson, S.D. 2005. New information on Segisaurus halli, a small theropod dinosaur from the Early Jurassic of Arizona. Journal of Vertebrate Paleontology, 25(4): 835-849


© ReBecca K. Hunt-Foster, all images from Mark Loewen and Sertich and Loewen 2010.
Posted by ReBecca Hunt-Foster at 4:22 PM 4 comments:

A watch that keeps "shitty" time?

Hopefully not! MSN is reporting that the Swiss watch company Artya has designed a watch out of a dinosaur coprolite. The watch comes complete with a wrist band made from the skin from an American cane toad and will retail for $11,290 .
From the press release:

"When it comes to daring innovation, Yvan Arpa is forever ahead and sets the trend for others to follow. He sublimates controversial materials and harnesses untamed elements in his creative processes. Rust, dust, and toad skin are turned into luxury icons, while lightning furiously engraves its mark on bare steel. Today the spotlight is on coprolite. He brandishes these fossilized feces in his pioneering style, raising this paleontological curiosity to the status of a work of art.

A relic of the Jurassic period, it has taken millions of years for this organic substance to embrace its present warm and matchless tints. Designed with an understated aesthetic sense, the dial is free of indexes or any other pointless features. In its mineral aspect, it forcefully underscores the pristine strength emanating from the very dawn of life. As a true memento, it is encircled in a round case sculpted in stainless steel grade 316 or, as an affirmation to its prehistoric lineage, in bronze with its characteristic blazing hues......"
Why didn't I think of this lol! The sad thing is it is probably just a concretion ;)
Posted by ReBecca Hunt-Foster at 3:41 PM 4 comments:

Journey To The Beginning Of Time

Don Prothero was recently searching for a tv series he remembered from the 1960's on the vertebrate paleontology list server. Several people remembered it and were able to point us in the direction of YouTube, where several of the episodes are posted. I thought I would share the links for those who might be interested.

© ReBecca K. Hunt-Foster
Posted by ReBecca Hunt-Foster at 7:25 AM No comments:

Email ThisBlogThis!Share to TwitterShare to FacebookShare to Pinterest
Labels: films, Journey To The Beginning Of Time

Paleo and Geo must reads

My friend Jim is trying to come up with a seminar type class for sometime in the future and he was wondering - if you had to pick a set of books or journal articles that you felt all paleontologists should read, what would you include? Feel free to read his post here to leave any comments and suggestions you might have.

Glenwood Canyon Rockfall on I-70

The Colorado Department of Transportation has done a nice job of keeping everyone informed on the closure of I-70 due to a rockfall in Glenwood Canyon. Its weeks like this that I think it would be interesting to work for their geoHazards group. As of earlier today they were waiting on the removal of a 20 foot boulder up on the hill that is in danger of possibly falling about 900 feet to the interstate below, further damaging the road. The CDOT had a helicopter on scene this morning to drop off drilling equipment and a generator for the planned drilling/blasting operations. I appreciate the fact that they have been posting pictures of the whole process on tweet photo, which I find rather interesting.

Sadly today, another rockfall on the road drivers have been diverted to, killed a woman near Steamboat Springs [link]. Rockfalls had not occurred in the area since 1998. In the Glenwood Canyon area the last significant rockfall was in 2004.

For now you can watch the clean up work live streaming on the CDOT website by clicking on the Glenwood Springs link here.