Two German researchers claimed in the months "Geology*"that they have found the evidence that proves Upheaval Dome in Canyonlands National Park was formed by a meteor. The quartz grains were found "off to the side of the crater, not in the middle, a finding that suggests the meteor collided at an angle." [link] The quart was actually found in the Jurassic Kayenta Formation! It has long been debated that this structure was possibly caused by a collapsed salt dome, volcanism or a meteor. 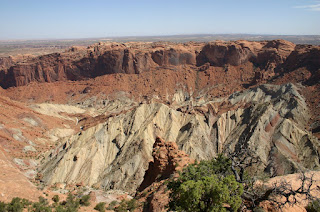 Posted by ReBecca Hunt-Foster at 12:48 PM