Unveiled at a British ban-the-bomb rally on April 4, 1958, the peace symbol's peak of potency was in the 1960s, when it was the emblem of the anti-Vietnam War movement and all things groovily counterculture. (Said its late creator, British graphic designer Gerald Holtom: "I drew myself . . . a man in despair . . . put a circle around it to represent the world.") The symbol has marched in service of many causes over the years: civil rights, women's rights, environmentalism, gay rights, anti-apartheid, the nuclear-freeze movement and the latter-day antiwar crowd.[link] 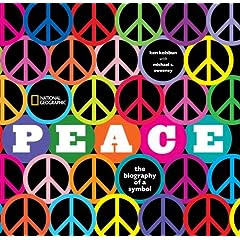 National Geographic Books is out with "Peace: The Biography of a Symbol," by Ken Kolsbun and Michael Sweeney, which traces the simple symbol from its scratched-out origins based on the semaphore flag positions for N and D (nuclear disarmament) to the influence it had, and retains, in social movements.

While the book details how the symbol came to be and how it spread, it focuses more on the backdrop of the peace movement generally, from its antecedents in the McCarthyism of the 1950s to nuclear proliferation, Vietnam, Kent State and the 1968 Chicago Democratic Convention to its later promotions of other causes. [link]

Posted by ReBecca Hunt-Foster at 11:03 AM

Email ThisBlogThis!Share to TwitterShare to FacebookShare to Pinterest
Labels: peace

I have tagged you for a meme, if you'd like to participate :)

Thanks! Thats a hard meme, I will have to think on it :)

Gee, I never knew the peace symbol was an official thing!