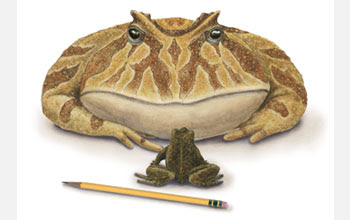 Now this is a pretty cool find! Beelzebufo - the devil frog!

A team of researchers, led by Stony Brook University paleontologist David Krause, has discovered the remains in Madagascar of what may be the largest frog ever to exist.

The 16-inch, 10-pound ancient frog, scientifically named Beelzebufo, or devil frog, links a group of frogs that lived 65 to 70 million years ago with frogs living today in South America.

Discovery of the voracious predatory fossil frog - reported on-line this week in the journal Proceedings of the National Academy of Sciences (PNAS) - is significant in that it may provide direct evidence of a one-time land connection between Madagascar, the largest island off Africa's southeast coast, and South America.

To identify Beelzebufo and determine its relationship to other frogs, Krause collaborated with fossil frog experts Susan Evans, lead author of the PNAS article, and Marc Jones of the University College London. The authors concluded that the new frog represents the first known occurrence of a fossil group in Madagascar with living representatives in South America.

"Beelzebufo appears to be a very close relative of a group of South American frogs known as ‘ceratophyrines,' or ‘pac-man' frogs, because of their immense mouths," said Krause, whose research was funded by the National Science Foundation (NSF). The ceratophryines are known to camouflage themselves in their surroundings, then ambush predators.

"The finding presents a real puzzle biogeographically, particularly because of the poor fossil record of frogs on southern continents," said Krause. "We're asking ourselves, ‘What's a ‘South American' frog doing half-way around the world, in Madagascar?'"

He said that because frogs "are not adept at dispersal across marine barriers, and since the few fossil frogs that are known from the Late Cretaceous in Africa are unrelated to Beelzebufo, one possibility is that there was a land connection between South America and Madagascar during that period."

"The occurrence of this frog in Madagascar and its relatives' existence in South America provides strong evidence that the supercontinent Gondwana 'disassembled' during the latest part of the Cretaceous," said Richard Lane, program director in NSF's Division of Earth Sciences.

Krause and colleagues have hypothesized this connection based on previous discoveries of sauropod and theropod dinosaurs, crocodiles and mammals in Madagascar that were very closely related to forms in South America.

Beelzebufo is one of the largest frogs on record and was perhaps the largest frog ever to exist. The size and robustness of its bones and its relatedness to the rotund South American forms indicates it was also probably the heaviest frog to exist.

The size, girth, appearance, and predatory nature of the frog prompted its discoverers to call it the "armored frog from hell." They derived the genus name from the Greek word for devil (Beelzebub) and the Latin word for toad (bufo). The species name, ampinga, means "shield."

The largest living frog today is the goliath frog of West Africa, which attains lengths of 12.5 inches and weights of 7.2 pounds. The largest frog alive on Madagascar today, at just over four inches long, "would have been a nice hors d'oeuvre for Beelzebufo," Krause said.

Since the discovery of the first bones found in northwestern Madagascar in 1993, Krause and his team have gathered some 75 fossil fragments of Beelzebufo. Through the accumulation of these fossils, the team has been able to reconstruct the frog's skeleton, including nearly the entire skull.

Not only was the frog huge, it was powerful in design, had a protective shield, an extremely wide mouth and powerful jaws. These features made Beelzebufo capable of killing lizards and other small vertebrates, perhaps even hatchling dinosaurs.

The research was also funded by the National Geographic Society.

Posted by ReBecca Hunt-Foster at 5:20 PM