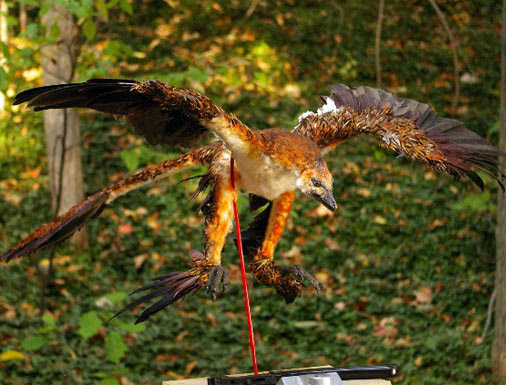 Tomorrow evening (at least here, check your local listings), NOVA debuts a new show all about Microraptor and its ability to use its wings. I am looking forward to this show! Last week they had a great episode about Ape communication (Ape Genius) that just blew me away. If you get a chance, be sure to check out that episode as well.

From the NOVA press release:
"In 2002, the discovery of a beautiful and bizarre fossil astonished scientists and reignited the debate over the origin of flight. With four wings and superbly preserved feathers, the creature was like nothing paleontologists had ever seen before. Now, NOVA travels to the Chinese stone quarry where the fossil was discovered—a famed dinosaur treasure-trove—and teams up with the world’s leading figures in paleontology, biomechanics, aerodynamics, animation, and scientific reconstruction to perform an unorthodox experiment: a wind tunnel flight test of a scientific replica of the ancient oddity. Find out whether this 130 million-year-old relic takes flight on The Four-Winged Dinosaur, premiering Tuesday, February 26 (tomorrow) at 8pm ET/PT on PBS (check local listings)."

Here is a short clip you can watch for a "Behind the Scenes" glimpse. Looks like they made some pretty cool puppets!


"How many scientists does it take to make a flying dinosaur? Go behind the scenes of NOVA's "The Four-Winged Dinosaur" and see how scientific reconstructors created a model Microraptor--an exotic feathered dinosaur."

Also keep an eye out for "Bone Diggers" on Tuesday, March 25 (8pm). I have not yet seen this episode, but it appears that it is all about Australian cave paleontology! "NOVA takes viewers to the stark Australian outback in search of the elusive bones of one of the world's most bizarre prehistoric creatures—a giant predatory marsupial called Thylacoleo. Australia's leading paleontologists endure extreme weather, treacherous drops into a deep cavern, and the threat of fossil poachers as they launch a daring expedition to find the rare megabeast." Giant predatory marsupials! Count me in!
Posted by ReBecca Hunt-Foster at 3:16 PM

I'll be catching the Australian one for sure.