The other day I wrote that I probably did not need to comment on Norman Silberling's letter. I was wrong. His words are poison, derogatory to younger scientist, and entirely uncalled for. So, Mr. Silberling, in response to your words: 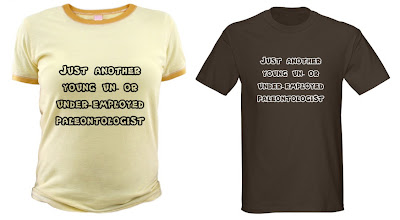 You, Mr. Silberling, have done more to hurt the process of getting down to the bottom of what has really happened than you have helped. You should be ashamed of yourself for degrading younger members of our profession because they may not yet be as gainfully employed as you are! I am offended by your remarks and I think you own a public apology to all the young professionals in both geology and paleontology for your cruel words! I am sure you probably think I am just another young "doe" with a grudge against Dr. Lucas and company. You would be wrong and quick to notice that I have no personal interest invested in this case, Dr. Lucas, his associates on the New Mexico side, or Mr. Martz, Mr. Parker, or their associates. I am just another young paleontologist who is quickly becoming jaded from attitudes like yours towards the younger crowd.

I only want what is right. To quote Dr. Jason Anderson, who has said it best, I want "an open, transparent, and impartial process to review the allegations." I have never pointed the finger in either direction and declared anyone's innocence or guilt. I just want to see the truth come out and to make sure that this sort of issue would 1) never be an issue again and 2) that a young professional would never have to watch their back in fear of retaliation for speaking up or for fear of loosing their research! I do not believe that is too much to ask.

If there is not another review done that is impartial, I for one an not going to be surprised when, come March 3, we find out that the review panel has exonerated Dr. Lucas of all wrong doing. Whether it is true or not. Mr. Silberling already exonerated him in his letter. It would not be a huge surprise when this is the official result.

If you like the shirts, you can find them here. All shirts are sold at cost, and I am not making a single dime off of them. Only trying to make a point.

Where I live, the O'Riley Factor is on at the same time as the NOVA program at 8:00 PM EST. So it'll be no problem in avoiding O'Riley. But I do have to keep in mind that O'Riley will be on again at 11:00 PM EST, though.

An excellent idea, ReBecca! We should all arrange to wear them at a predetermined time and place at SVP, like a flashmob!