Yesterday John and I had a chance to visit with Dr. Jim Kirkland (Utah State Paleontologist). Jim worked in Fruita in the 1990's as the lead paleontologist for Dinomations International Society, in the same building where Dinosaur Journey is currently located. He found and participated in many important paleontological discoveries in the western Colorado area during this time. These include a Dryosaurus nesting site in the Morrison Formation, a bird skull from the Green River Formation, the first Jurassic Ankylosaur - Mymoorapelta maysi (below), along with numerous other dinosaurs from the Morrison Mygatt-Moore Quarry.

image from Gaston Design
While Jim was in town we took the opportunity to have him show us some of the classic sites he has worked, including the Dryosaurus nesting site. We hiked out the site and were happy to be able to find some additional bones. 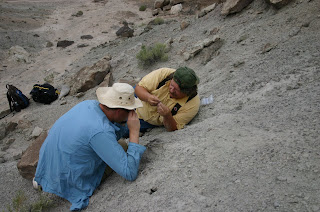 (above) Jim and John at the site, (below) John and I at the site (picture by Jim Kirkland) 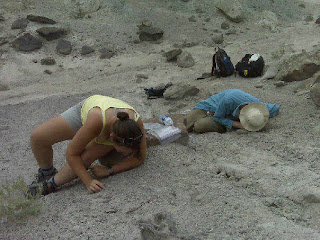 I was very excited to find a nice Dryosaurus coracoid, partial femur (pictured below) and two phalanges (toe bones). John found several small bone fragments and Jim found a nestling Dryosaurus vertebra (very small! I wish I had taken a picture of it). 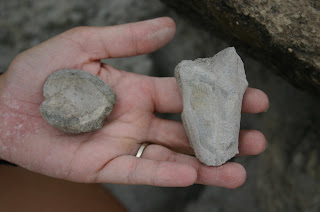 Jim believes that this site was raided by mesosuchian crocodiles, which would eat the eggs/hatchlings and yearlings known from this site*. We also found a few pieces of egg shell at the site (pictured below). 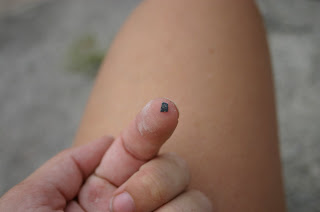 This was only the second time I have seen egg shell in the Morrison Formation. The first time was at the Young Egg Site, also in Colorado (pictured below). 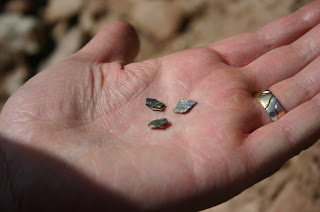 We continued on to prospect and locate another known site from the area (see below). We hope to be able to go out today to visit additional sites and have a chance to prospect some (if the rain will hold off). 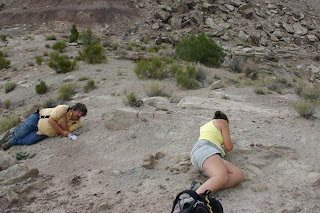 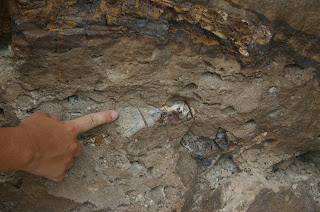 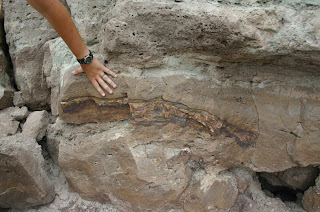 © ReBecca K. Hunt-Foster. Please see the "Field Work Friday Rules" about the work I do and collection practicies.
Posted by ReBecca Hunt-Foster at 12:09 AM

I'd kill to work with Jim!