I thought I would jump on board with the Summer Reading List Meme that has been going around this month. Suvrat started it, followed by BrianR, then Eric, Silver Fox, and ITV Brian. Rules are easy: What are you reading/planning to read this summer? This is my non technical list. I am way behind on my journal reading. 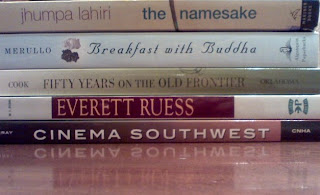 In no particular order:
So there is my random list. I must admit that one nice thing about not being in the hard core rat race of grad school is the fact that I actually have time to read books I enjoy! And it does not always have to involve paleontology or even science. Crazy concept, but it is actually rather nice and relaxing to still be able to do what I love but also slack off and read some fun fiction every now and then. It is kind of interesting now to look up at my list and realize there is a common thread of travel in these books. Odd, I wonder why ;)
© ReBecca K. Hunt-Foster
Posted by ReBecca Hunt-Foster at 10:05 PM

I must admit that one nice thing about not being in the hard core rat race of grad school is the fact that I actually have time to read books I enjoy!

Haha, this reminds me of my first few years after graduation, when I could actually just watch a film for the sheer pleasure of it without having to worry about writing a 20-page essay.

So far in June, I have read:
Julie and Julia
Animal, Vegetable, Miracle
The Miracle at Speedy Motors

Next up is Information Power

How was Julie and Julia?

Yea, I can't catalogue my list like that. I will usually pick up the next book on my 100 Greatest list that I happen to have on the shelf. Or whatever Star Wars book just came out. Reading The Return of the Native right now