I thought I would start with the St. George Dinosaur Discovery Site at Johnson Farm (St. George, Utah). This museum is a unique, world-class dinosaur track museum. The museum sits on land that was once privately owned by Dr. Sheldon Johnson, and the first tracks were located on February 26th, 2000 to prepare the land for commercial resale. The tracks are found in the lower part of the Whitmore Point Member of the Moenave Formation (Early Jurassic in age; 195-198 million year old). After the discovery of the tracks and the large amount of visitation and press the site recieved, the land was donated to the City of St. George. 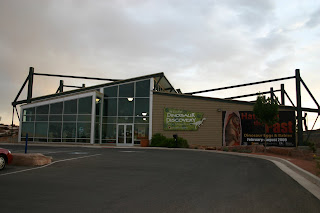 I first visited the site in 2002 when there was nothing more than a pavillion over some of the tracks and a garden shed as the prep lab. Since that time they have built a truly wonderful museum, which was finished in April 2005! I had never visited a museum where they preserve the original bedding plane for everyone to see. It is really a sight to see! They have several track blocks around for guest to view on the southeast side of the museum, with the main track layer exposed along the north side of the building. A lab where fossils (such as the numerous fish they have also discovered) are cleaned and studied, is situated in the southwest corner for visitors to view and ask questions. They also have a cool gift shop full of some unique gifts, not the same crap you see in every other gift shop. 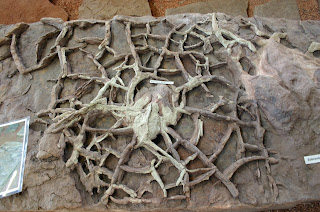 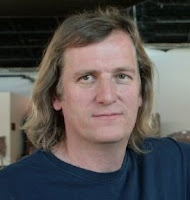 The museum is run by paleontologist Andrew Milner. I took a moment to interview Andrew and ask him a little about his background and how he came to work at this great museum:
(RKHF) What is your background? How did you get into
paleontology?

(AM): Did my undergrad degree at Brock University in St. Catharines, Ontario with a major in Geology and minor in Biology. Worked two years with the Canadian Museum of Nature in Ottawa
and five seasons for the Royal Ontario Museum in Toronto at the Burgess Shale in British Columbia. I've been preparing fossils since the age of 12. My interest in paleo always got in the way of school. Things have always got in my way for graduate school, but experience goes a long way and I have a lot of it. I'll complete graduate school one of these days, even if I'm in my 90's!
(RKHF) How did you get into paleontology? 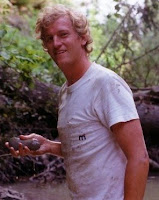 (AM): I was 6 years old and had just moved from England to Quebec. My aunt came to Canada for a visit, and she picked up a Middle Ordovician brachiopod fossil off the trail and showed it to me. I was
collecting them for the rest of the hike. We lived in the Laurentian Mountains north of Montreal, so no fossils are known in this part of the Canadian Shield. Turns out that the gravel we were finding fossils in was shipped in from Montreal in the St. Lawrence Lowlands. I started digging holes in the driveway (also gravel from Montreal). My brother gave me a book on prehistoric animals and that's when I saw my first dinosaur. I've been hooked ever since, especially with lots of encouragement from my parents. My future was sealed when I started collecting Late Pleistocene Champlain Sea fossils (as seen in picture) and showing them to Dr. Richard Harington at the Canadian Museum of Nature. He was impressed with what I was finding (seal skull, complete frog, rare fishes, insects, plants, etc.).


(RKHF) What brought you to Utah from Canada?
(AM): My wife, Lynn White, graduated with a PhD in Physiological Psychology at McGill University in Montreal in 1997. She immediately sent out her CV and job applications all over Canada and the United States. She was accepted at University of Wisconsin, University of Prince Edward Island, and Southern Utah University in Cedar City, Utah. As soon as Lynn said Utah, I said let's go! The paleo of Utah being the key factor for me. We drove from Montreal to Utah in a moving truck in August, 1997.


(RKHF) What has been your favorite part about your job in St. George?
(AM): I think my favorite part of the job is when we are excavating new sites. I don't know what it is about this area, but as soon as we start digging we usually make a significant discovery. Getting to work with and meet so many interesting people is an added bonus.


(RKHF) What is the most professionaly important/significant thing you have done while at the track museum?

(AM): Difficult to choose from because so much has gone on here in such a short period of time. I suppose I would have to list as number one, helping build a museum to preserve the site.
Significant discoveries would be the world's largest and best preserved collection of theropod dinosaur swim tracks ever found, and the discovery of one of only five crouching theropod dinosaur traces. Ours is the only one in the world with clear hand impressions. 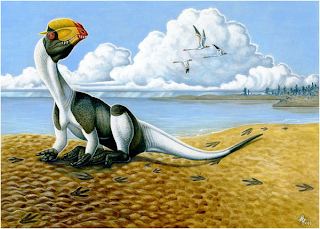 A restoration of Early Jurassic environment preserved at the St. George Dinosaur Discovery Site at Johnson Farm, with the theropod Dilophosaurus wetherilli in bird-like resting pose, demonstrating the resting trace with hand impressions. Art by Heather Kyoht Luterman, image from here.
(RKHF) Can you tell us a little more about how the track site was found, and how work there has progressed till now?
(AM): Dr. Sheldon Johnson was leveling a hilltop on his property, preparing the land for commercial resale. He had taken most of the hill away when a large sandstone block rolled out of the back of his dump truck. He noticed a three-toed natural cast of a Eubrontes track. His first thought was that the dinosaur was still in the rock and its foot was sticking out. It wasn't until he continued flipping rocks over that he realized that they were in trackways, and he was looking at sandstone infills of the tracks. Two weeks after the discovery Jim Kirkland called Wade Miller, Alden Hamblin and myself to go and look at the site. This was before the public found out about it. We met the press on that day and that's when people started visiting the site in huge numbers.

The City of St. George became involved and put up a fence around the site. Volunteers began
giving tours and the city hired a volunteers coordinator. Martin Lockley, Jim Kirkland and other came to the site to start proper documentation. That's when the in place "Top Surface" tracksite was discovered (one site now covered by the museum) and we had to stop excavating the "Main Track Layer" (original surface discovered by Sheldon). This is also when we discovered the tail drag with the Eubrontes trackway which secured $0.5 million from the federal government toward a museum. I was hired on by the City in October, 2001.

Hard to believe, but in less than 5 years after the discovery, a museum was being built over the site. Unfortunately our building is not big enough to house everything we have collected and we desperately need another building. Most of the dinosaur swimtrack collection is outside under make-shift wooden boxes and they deteriorating despite our effort to try and preserve them.

(RKHF) Do you have a favorite fossil that you have found (anywhere in the world)?

five? At the St. George Dinosaur Discovery Site at Johnson Farm it would have to be discovering all of the dinosaur swimtracks in place. We have now identified well over 3000 individual claw marks and we are no where near finished preparation of the blocks. Finding a complete Anomalocaris at the Burgess Shale was a rush. The 10,800 year old leopard frog with insect part in its gut was an exciting discovery, especially since I'd always said, "I'd love to find a Champlain Sea frog!" All alone, jumping around like a crazy person on a beach along the Ottawa River when I found a Harp Seal skull was fun. Aside from the dinosaur swimtracks though, I think the best find of my life was showing Jim Kirkland where "Andrew's Site" was in the Lower Cretaceous Cedar Mountain Formation (pictured above). It's produced a new species of iguanodont (adult and juvenile), a new Fruitachampsa-looking terrestrial crocodile, the skull of a fairly large, new mammal, the tail of a small dromaeosaur, and a partial Gastonia on a lower bed. Two small theropod caudals are what made me take notice in 2002. Jim returned in 2005 to discover bones coming out all over the hill.

I read the paper on the crouching theropod a few months ago, but had no idea that they have it displayed in a museum... I may have to go there somewhere along the line.

It is still in situ! You can see where it is in the museum and they have talked about trying to figure out a way to build a elevated walk way to it so you could see it from above. You can also see a cast of it at the museum. I have pictures of it on the link I posted. You should check the museum out some day - its really great!