*Please remember that all collecting of rocks, minerals, plants, fossils or cultural objects (i.e. arrowheads) from National Park Service land is illegal and punishable by a fine*
THE SIYEH FORMATION 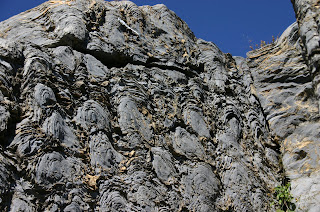 The Siyeh Formation (also known as the Helena Formation) is by far the best exposed formation in the park. This formation outcrops as one drives along the Going-to-the-Sun Road alongside the Garden Wall, up to the western flank of Going-to-the-Sun Mountain in the Saint Mary
Valley and in several other locations within the park, particularly in Two Medicine and the Many Glacier areas. This 1.1 Ga limestone formation also contains numerous fossils. Seven species of stromatolites have been described from the formation, along with filamentous microfossils and
puzzling “molar-tooth structures.”

Mound-, conical- and dome-shaped stromatolites are so abundant in the Siyeh (Helena) Formation that they are now often grouped in zones. These zones are typically somewhat continuous and have a general similar thickness. The Fentons worked extensively in the Siyeh
(Helena) and first described four subdivisions and stromatolite zones within the park. Some of these zones are so persistent that they are often 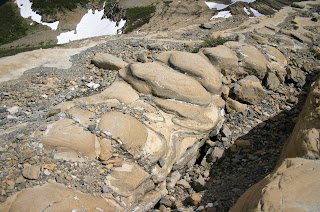 called bioherms (Fenton and Fenton, 1933). Some of these well exposed zones can be seen at the foot of Grinnell Glacier (right), along the trail leading to Granite Park chalet (above left), and near Hole-in-the-Wall. Rezak (1957), and later with Ross (Ross and Rezak, 1959), redefine these into three zones. Afterward Horodyski (1985b, 1989) redefined the zones into cycles, specifically the Jacutophyton and Baicalia-Conophyton cycles. The Baicalia-Conophyton cycle is subdivided into six distinct units by Horodyski and composes 70% of the actual volume of stromatolites from within the Siyeh (Helena) Formation. Horodyski conducted thorough research on the Siyeh stromatolites, resulting in eight publications. Isolated stromatolite occurrences not associated with these cycles are also known from within the park. 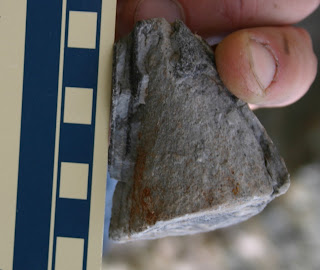 A conical stromatolite, conophyton, from the Siyeh Formation.

Sedimentary structures, such as mud cracks, scour marks and load-casts are common in the Siyeh (Helena) Formation. Fenton and Fenton (1937) describe pelecypod burrows and trails near Dawson Pass. It is commonly believed that the remains described by Fenton and Fenton (1937) can be attributed to these non-organic remains. Microfossils have also been described from chert in the lower portions of the Baicalia-Conophyton cycles (Horodyski, 1985a).

The Siyeh (Helena) Formation also contains one of the strangest 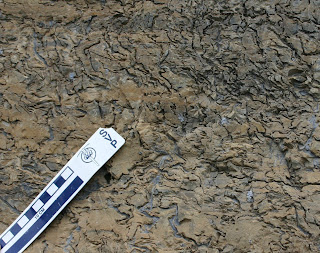 pseudofossils to be described from the park – the molar-tooth structure (right). These irregular patterns were first described by Bauerman (1885) and are thought to resemble the grinding surface on the molar teeth of
elephants. They have been considered to be organic in origin by several authors; an idea often contested. Daly hypothesized that these structures were the result of “secondary tectonic segregation” (Daly, 1912; O’Connor, 1972). Walcott (1914) described these structures as organic remains, believing them to be algal, and named three types, Greysonia, Copperia and Weedia. Fenton and Fenton (1937) and Rezak (1957) concur with Daly’s hypothesis, where O’Connor (1972) and Smith (1968) interpret them as having a syndepositional origin, as a direct result of algal activity (Horodyski, 1993b). However, Ross (1959) also attributed the structures to an organic source. Horodyski (1976b, 1983b, 1985a,b, 1989) interprets them as being produced as a result of calcite infill of open-space structures. Overall, the prevailing opinion regards these molartooth structures as inorganic remains.

I have visited this section 3 times- this is the best review that I have seen. Horodyski was a great scientist (too soon gone) and there is so much more to be seen. Equally interesting is the redbed and crossbedded sands of the Grinnell Formation... it is bright red but and somewhat boring but is full of desiccation surfaces, rippled beds (shallow water) and perfect salt casts. Someone showed me raindrops on one surface - funny, they were cubic (salt casts).
Sincerely B.C. Schreiber
geologo1@u.washington.edu

Thank you, I appreciate your comments. I also love the Grinnell Formation and have even found some small stromatolites in it. I have seen some pretty large salt cast in the Grinnell as well! So many great things to see up there!