*Please remember that all collecting of rocks, minerals, plants, fossils or cultural objects (i.e. arrowheads) from National Park Service land is illegal and punishable by a fine*
THE APPEKUNNY AND GRINNELL FORMATIONS

The Appekunny Formation is a 1.375 to 1.4 Ga mudstone, and is often referred to as the Appekunny argillite. This formation is the approximate temporal counterpart of the Grayson Shale in the Big Belt Mountains (Fedonkin and Yochelson, 2002) and can appear green in color, due to the large amount of chlorite minerals.

Mudcracks and ripple marks in the Appekunny Formation
Stromatolites were reported from the upper Appekunny Formation (Earhart et al., 1989), although no other reports have been made of stromatolites from the Appekunny argillite (Horodyski, 1985b). Authentic microfossils and pseudomicrofossils are also known from this formation, first reported by Horodyski (1981, 1993b) from dark gray to black fine-grained muddy sandstone, sandy mudstone and mudstones. The pseudomicrofossils appear to be organic envelopes and spiral impressions, while the authentic microfossils appear to be poorly preserved sphaeromorphs (Horodyski, 1993b). These sphaeromorphs are too poorly developed for general assignment, but are within the size range of prokaryotes (Fedonkin and Yochelson, 2002). Fedonkin et al. (1994) describe several types of sphaeromorphs, dubiofossils and pseudofossils from the Appekunny Formation. They conclude that some pseudofossils found in this formation could be the result of sedimentary processes that are unknown today. However, they note that several of the surfaces were
once “alive” and merit further study.

In 1972, Horodyski discovered a fossil he referred to as “problematic bedding-plane markings, each resembling a string of flat beads” near Apikuni Mountain (formerly Appekunny Mountain; Horodyski, 1982a, 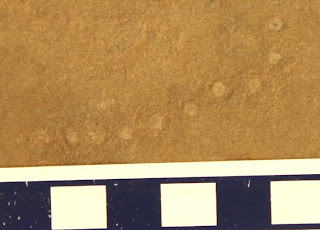 1983a, 1985a, 1993a,b). The validity and taxonomy of these markings were questioned for years by Horodyski and others. Often referred to as dubiofossils, in 1991 they were interpreted for the first time, as fossils of a megascopic organism. Yochelson et al. (1993) interpreted the remains to be “metaphyte or metazoan body fossils and/or trace fossils, although evidence of their organic origin is still not conclusive.” After the death of Horodyski, Fedonkin and Yochelson (2002) continued to work on the “string-of-bead” fossils. Together they concluded that the remains belonged to a new type of eucaryote, which they named 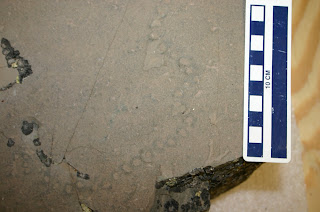 Horodyskia moniliformis (above, right; Fedonkin and Yochelson, 2002), in honor of the contributions of Horodyski to Precambrian paleontology. Similar fossils have also been recognized from rocks of comparable age in western Australia. Growth stages have been recognized for Horodyskia and its presence in an argillite signifies that it would have possessed a highly specialized mode of life. These fossil organisms are considerably older than other accepted multicellular organisms, making this a significant discovery. 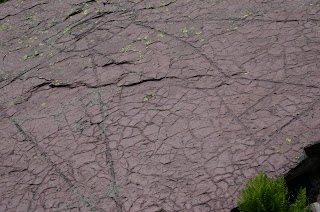 Mudcracks in the Grinnell Formation (above)

The Precambrian Grinnell Formation is composed of an argillite, similar to the Appekunny Formation. The Grinnell argillite is rich in hematite, with occasional green banding due to the presence of chlorite (above). Fossils from this 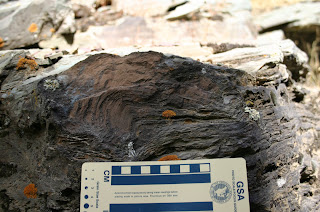 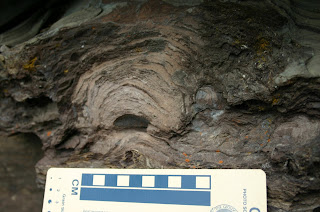 1983a, 1989). The scarcity of these fossils is most likely due to the high rate of deposition of terrigenous sediment that would have clouded the waters where these fossils attempted to survive. The algal components of stromatolites require clear waters in order to utilize photosynthesis. A high content of silt in the water would likely have halted this process.

Posted by ReBecca Hunt-Foster at 12:49 AM

Hiking in Two Medicine yesterday we were talking about these rocks and inspired me to learn a bit more about our beautiful green and red rocks. Thank you for this info.