*Please remember that all collecting of rocks, minerals, plants, fossils or cultural objects (i.e. arrowheads) from National Park land is illegal and punishable by a fine*

THE PRICHARD AND ALTYN FORMATIONS
The Prichard Formation, 1.375 to 1.4 Ga sandstone and siltstones, is only found on the western side of the park and is believed to be the age equivalent of the Altyn Formation, found in the eastern portion of Glacier National Park. This formation has been reported to contain microfossils and pseudomicrofossils (Horodyski, 1981). The microfossils found in the dark gray mudstones of the Prichard Formation are of interest due to the fact that they demonstrate the effects of burial metamorphism on organic-walled microfossils. The fossils, which consist of black carbonaceous films, are very rare and poorly preserved, with only 12 known thus far. Due to the extent of their altered state, these fossils cannot be identified to the genus level and are therefore not useful for biostratigraphic correlations. The pseudomicrofossils from the formation occur as spheroids and filaments and illustrate an occurrence of non-biogenic carbonaceous microstructures that could be mistaken as authentic fossils (Horodyski 1981, 1993a).

The Altyn Formation, found in the eastern portion of Glacier National Park, is composed predominantly of 1.350 to 1.450 Ga limestones and dolomite. When the park was studied by paleontologists such as Charles Walcott around 1914, this formation was often referred to as the “Newland Limestone,” a formation known from the Big Belt and Little Belt Mountains. The Fentons noted a stratigraphic error made by Walcott in assigning Weedia tuberose to the Altyn Formation. They reassigned this genus to the Siyeh Formation and also identified Beltina cf. danaii in the park (Fenton and Fenton, 1931, 1937; Horodyski, 1985a, 1993b). However, this remains an important discovery in that it is one of the earliest published reports of fossils from the park.

One of the significant contributions to the park’s paleontology in the 1930s was the description of a massive bed of stromatolites located near Apikuni Falls (also known as Appekunny Falls) in the upper Altyn Limestone (Fenton and Fenton, 1931). These columnar stromatolites are located in a light gray to tan limestone that is some 6 m thick at the foot of Apikuni Mountain. They were named Collenia columnaris by Fenton and Fenton, with two other locations containing C. columnaris identified from within the park (Fenton and Fenton, 1931, 1937; Horodyski, 1977). Another stromatolite group occurring above the C. columnaris zone was assigned to Baicalia by White (1970). Ross (1959) notes that the zones are well developed on both Apikuni (“Appekunny”) and Divide Mountains, but poorly developed or absent in other areas, making it a discontinuous zone in the Altyn Formation. Horodyski (1976a) studied these stromatolites in great detail, describing three macrostructural varieties that occur in this horizon. In 1957, Rezak reassigned Collenia columnaris to Collenia frequens without explanation, assigning it as a “zone” due to its presence in two new locations (Ross and Rezak, 1959). Horodyski (1985a) took this a 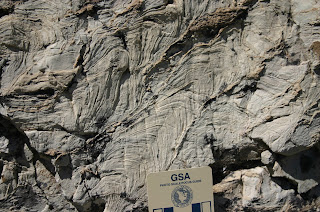 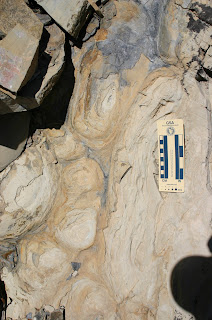 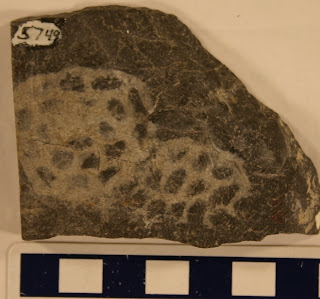 Collenia frequens. White (1974a,b, 1979) also reports on an assemblage of microfossils that are comparable to modern blue-green algae and unicellular green algae from black chert found within the Altyn Formation (Horodyski, 1993b). Circular "trace fossils" found in the 1960s from the Altyn Formation have since been found to be pseudofossils that were made by modern bees (right; Sando, 1972).

White, B., 1970, Algal stromatolites, depositional environments and age of the Altyn Formation of Montana: Geological Society of America, Abstracts with Programs, v. 2, p. 719-720.

White, B., 1979, Stratigraphy and microfossils of the Precambrian Altyn Formation of Glacier National Park, Montana, in Linn, R.M., ed., Proceedings of the First Conference of Scientific Research in the National Parks, v. 2, p. 727-735.

White, B. and Pedone, V.A., 1975, A new microfossil locality in the Precambrian Altyn Formation of Montana: American Association of Petroleum Geologist- Society for Sedimentary Geologist (AAPG-SEPM), Abstracts with Programs, v. 2, p. 80-81.
Posted by ReBecca Hunt-Foster at 12:26 AM