My field work fun had come to an end. I woke up with 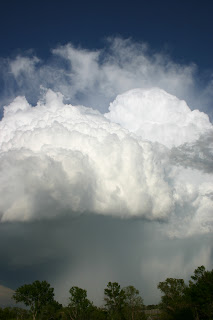 no voice and a horrible sore throat and plugged nose. I opted to stay in that day - I just felt rotten. I went inside and crashed out on one of the bunks, then went into town (Harrison - about 10 miles to the south) later that day. Soup and hot chocolat...The next morning was the beginning of the ende helped some, but the next day I was not any better and it had moved into my nose/sinuses and set up camp. So, once again, I missed another day in the field, plus the trip to Agate Fossil Beds National Monument. I had a fever and spent most of the day sleeping in the bunk house. The next day my throat was better, but my head felt miserable. This was the day the student got to take a trip to Mount Rushmore and Hill City to visit the Black Hills Institute of Geologic Research. I felt like crap on a stick but went so I could get meds and cell service so I could call the doctor to make an appointment for the day after we returned. I spent most of the day sleeping in th van, but did make it inside to see Pete Larson's cool Triceratops they are working on. Some great stuff coming from it and I can't wait to see it published! I then returned to the van for more sleeping. The next day was the last day of field work and I missed it!!! Being sick in the field sucks!!! I was none to happy about this, but I also had no energy to walk to my tent, let alone prospect. I stuck close to the bunk house, rested and read (see post on books, the best thing to come from being sick!).

The student who had found the two oreodont skulls the first day seemed to have a good eye. He found a weird skull on one of the days that I was sick (left). We think it is maybe a bear dog (Daphoenodon) or a creodont. After I got it prep'ed I am now leaning toward creodont (see below). The teeth look off to me if it were a bear dog. Would anyone out there like to venture a guess (or just tell me the answer??). 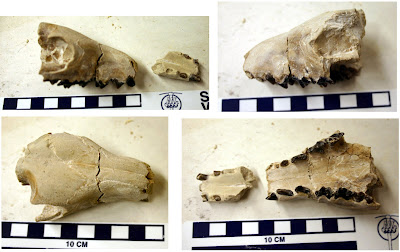 The students had to take their final exam in the bunk house this year because we were having quite a bit of rain. Every day that I missed field work it rained. All the students had studied pretty hard for the test and they did pretty well. Some students also opt to write a paper over an aspect of the White River Badlands (picked from a list we have), for more credit. This was a really good bunch of students. They were all very nice, sober (for the most part) and well behaved (especially compared to past years) and it was a nice change! I didn't feel like I was babysitting! 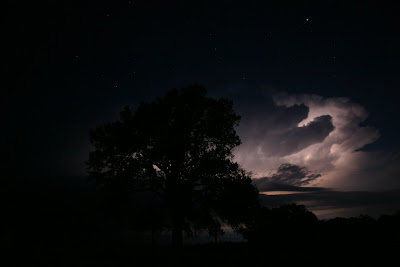 The next day we headed back to the real world. The wind in Nebraska was horrible, out of the southeast, and we had Yakama racks on top of the vans, so it was awful trying to keep the vans on the road (and scary at times!) Come to find out there had been straight-line winds and tornadoes the day before and we saw some of that damage. When we stopped for dinner in Des Moines we were disturbed to see that they racks had actually been moved by the wind! They had been on the right side of the van but were now in the center! Not a fun thing to discover. I was happy to be home, but it was rather bitter sweet, since I had missed so many days of field work and knew it would be my last trip as Hammer's research assistant. He and I get along really well and it has been really nice working for him.
Posted by ReBecca Hunt-Foster at 11:14 PM

Wow, quite an end to your field trip - the winds and all. Sorry you were sick and missed those last days - yuck. But I've enjoyed these posts, interesting and animated, and badlands are fascinating places.

Thanks! Being sick sucked, but it was nice to be better. Glad you enjoyed the post though! Sorry they were so long.