...The next day we worked an area called the "little badlands." This area has been good to us in the past, and I have gotten a good sized turtle from here. This day I was walking around and came across alot of coyote tracks (along with plenty of cow, pronghorn and smaller tracks - probably fox. It has been really wet there recently so the tracks were pretty fresh and well preserved). Alot of them, of varying size. I had been seeing some modern bones around, but had not thought much of it, since that had been common in this area before. I came around a corner and finally realized what I was seeing - definitly more than one individual in the area, multiple taxa, and probably some juveniles of one of them. I was cursing myself for not having taken my camera out that day. The curious part of me continued to follow the tracks and I rounded a corner and saw a nice medium-sized hole in the side of an embankment. It was pretty obviously a den, many tracks coming and going from the hole (but smaller tracks, probably fox). I stayed clear of it and kept going, following the larger tracks. I got a bit away and come across what was very obviously the coyote den! It was a mess. Lots of tracks of various size going an coming, once again, and a nice leg laying in the entrance. Not attached to anything, but a loose (probably pronghorn) leg, with plenty of scat all over the area. They were not very tidy. I really steared clear of this one!! No way did I want to piss off a coyote with little ones and fresh food!! I radioed it in and kept the students away from the area. I did score a nice pronghorn skull with both dentaries (probably had at least 20% of the rest of him there, but it is always hard enough to get modern stuff home in the van as it is). I am sure this gift was complements of the coyote family.

I caught up with Paul and spent the rest of the morning prospecting with him. We were not having much luck. I found a set of articulated ribs, but the rest of its body was long gone. I told Paul about the dens and we went back so he could see. We crested a hill just in time to see a little fuzzy head outside the medium-sized den! That was really exciting and it got the curious side of Paul and I interested so we headed towards the den. We sat pretty far away from it, but close enough that we could still see the entrance. We sat very still and waited. After a few minutes we saw some movement inside and for a split second I saw a fuzzy fox face that was only there for a moment before it faded back into the dark depths of its den. It was really exciting! We thanked her for the appearance and then left her to her day and we got about with our own.

About 10 minutes before it was time to round the group up and head out I looked down on the side of a gully and found a beautiful little oreodont skull! It is by far the smallest one I had ever found and is in great condition! 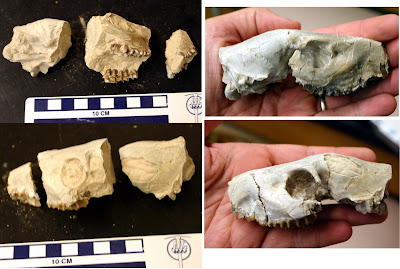 (left- before prep, right - after prep)

That day we spent the the afternoon letting the students study for their test they would have at the end of the trip, clean their finds and generally relax (they have it so easy!). I headed into town with the TA's and Hammer for a trip to check my email at the library in Harrison (yes, I am addicted, but I had things that needed attention) while the others gathered supplies and watered themselves at the local bar. It had been a pretty good day. Little did I know that was all about to change!

I'd say, some good badlands, and neat photos and fossils.