A peak in the Transantarctic Mountains has been named in honor of my former employer (Augustana College and Bill Hammer)!! It is the larger mountain in the center of this photo. 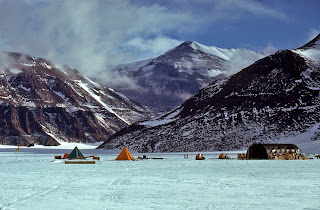 You can read more about Dr. Hammer and his work in Antarctica here.

From the Augustana College Press Release:

"A 9,000-foot peak in Antarctica has been christened Mount Augustana in honor of Dr. William R. Hammer and Augustana College.


The National Board on Geographic Names, which made the designation, describes the location of Mount Augustana as between the heads of LaPrade Valley and Cheu Valley in the northern Cumulus hills, Queen Maud Mountains.


Hammer was in the Antarctic working in this area on his first trip there in 1977-78 and again in 1995-96. He has made seven expeditions to the Antarctic. He and his team are known for discovering the first dinosaur bones ever found on the icy continent in 1991.


"Augustana College has a long history in polar and glacial geology, with strong ties to Antarctic research," said the Advisory Committee on Antarctic Names in its citation. "The Fryxell Geology Museum at Augustana College is the home of the only fossils of Cryolophosaurus, the largest carnivorous dinosaur found to date in Antarctica."


"It is a recognition of the 30 years that I have been involved in Antarctic research," said Hammer. "Since I have been at Augustana for 26 of those 30 years it also recognizes that the college has strongly supported my work. In addition I have worked closely for those 30 years with Jim Collinson, a geologist from Ohio State who is an Augustana alum. In fact, Jim talked me into applying for this job 26 years ago."


Another long-time colleague of Hammer's nominated Mount Augustana to the National Board on Geographic Names.


"The board approves the name if they feel the person or institution has made substantial contributions to Antarctic science," said Hammer. 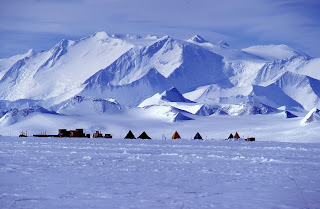 However, it's not the first time a name has linked Augustana and Antarctica. Last year the U.S. Board on Geographic Names voted to christen an ice-covered col (glacial ridge) in the Antarctic's Ellsworth Mountains as "Hammer Col" in honor of the Augustana paleontologist [see picture above: Hammer Col is high ridge coming off of the Vincent Massif which is the highest peak in the picture (it is also the highest peak in Antarctica!!)]. The col is at 12,467 feet between the Vinson Massif and the Craddock Massif in the Sentinel Range, Ellsworth Mountains. It is 1.5-miles wide and visually separates the two massifs (mountain groups) when viewed from the east or west.


Also, Hammer said, there is a Lake Fryxell in the Dry Valleys region of Antarctica near the coast (named for 1922 Augustana graduate Fritiof M. Fryxell, first chair of the department of geology) and a Lake Hoare (named for Dick Hoare, an undergraduate at Augustana who was a professor and researcher at Bowling Green State University). Those features were named in the International Geophysical year of 1957-58. Glacial geologist Dr. Troy Pewey named the lakes for Fryxell and Hoare. Pewey was a student at Augustana before doing his PhD glacial work and was one of the scientists funded for that year.


The northern slopes of Mount Augustana are rugged, largely ice-free terrain that descends 4,900 feet to McCregor Glacier. The southern part is ice-covered and descends gradually to the head of Logie Glacier.

Photo courtesy of Bill Hammer
Posted by ReBecca Hunt-Foster at 12:55 AM