We are continuing our interview from yesterday with Dr. Tom Williamson and Dr. Thomas Carr regarding their research on the new species of tyrannosaur, Bistahieversor sealeyi. This is the final part of the two-part series. 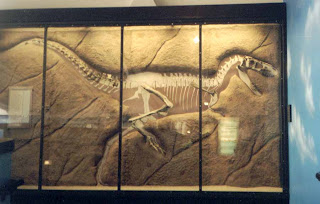 TW: I have been very interested in the biostratigraphy of vertebrates in terrestrial deposits as well as their paleobiogeography; that is the study of the ancient stratigraphic and geographic distribution of vertebrate animals. As the fossil record of Late Cretaceous and Paleogene vertebrates improves, we are able to get more precise ages of various vertebrate faunas and this allows us to correlate much more accurately between faunas distributed among numerous depositional basins scattered throughout western North America and the rest of the world. This is allowing us to build up a better picture of the movements of different groups of animals over the globe. When this is combined with the evolutionary history of certain clades of animals, such as dinosaurs, we can begin to see patterns of how dinosaurs moved and evolved in response to global events such as climate change, changes in global sea level, changes in connectivity and dispersal routes between different biogeographic areas, and provinciality. 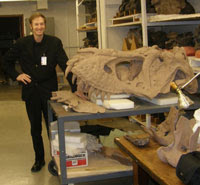 TC: Tom and I really wanted to credit Paul Sealey, who discovered the holotype (the adult) specimen. So the species name was an easy choice. If I recall correctly, Tom wanted to acknowledge both the BLM and the Navajo Nation, so he suggested using the Navajo term “bisti”, which means “place of the adobe formations” and also is part of the name of the “Bisti/De-na-zin Wilderness area”. I suggested “eversor”, which is Latin for “destroyer”, instead of “saurus” or “tyrannus”, which are used quite frequently. The name is pronounced “bis-tah-hee-ee-versor”; if you say it enough times, it rolls off the tongue quite easily!

RKHF: What does the discover of Bistahieversor tell us about dinosaurs that lived in the American southwest? How does it help to fill in our view of this part of the world, since more seems to be known about the American northwest and southern portions of Canada. 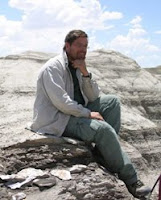 TW: Most dinosaur faunas of late Campanian age have, until recently, come primarily from the northern Rocky Mountain Region, especially Montana and southern Alberta. Few dinosaurs have been documented from more southerly regions until very recently. Now faunas are becoming better documented from New Mexico, southern Utah (Kaiparowits Formation), and West Texas (Aguja Formation), and even Mexico (Cerro del Pueblo Formation, Coahuila, Mexico). These show that there was pronounced provinciality among dinosaurs so that each basin has a largely unique dinosaur fauna. Tyrannosaurs show a similar pattern so that each depositional basin that contains an identifiable tyrannosaur taxon has an endemic genus and/or species. This is not true of the latest Cretaceous when only one tyrannosaur is known from across western North America; Tyrannosaurus rex. This remains a mystery, but might partially explain why dinosaur faunas are so diverse in the late Campanian compared to the late Maastrichtian.

RKHF: Do you think there were geographical barriers between the northern portion of the US and the southwest US that would have restricted movement, and if so, to what degree.

TW: There is no evidence for geographical barriers between northern and southern regions of the US that I'm aware of, other than simple latitudinal differences. In addition, we see distinctive differences in the dinosaurian faunas between nearby areas of the southwest such as southern Utah and the San Juan Basin. It's not clear if these differences are due to slight age differences between the faunas or if they reflect something else. It's all very puzzling, but that's what makes it so interesting.

RKHF: What type of research is currently in your future?

TC: I presently have two projects on the go regarding T. rex ontogeny, and two others on Daspletosaurus diversity and ontogeny. Also, Tom and I will produce a monographic treatment of Bistahieversor, so this short article is a taste!

TW: Recently, I have focused on the early Paleocene vertebrate record in the San Juan Basin. This record is one of the best in the world, spanning about four million years in the interval immediately following the mass extinction that wiped out so many of the latest Cretaceous dinosaurs and other animals. The early Paleocene was a time of ecological recovery during which animals and plants, and especially mammals underwent rapid evolutionary change, accompanied by an explosive increase in diversity and morphological variation. This is considered one of the best examples of an evolutionary radiation and is one of the most significant events in mammal evolutionary history. I am working with several colleagues including Anne Weil (Oklahoma State University), Ross Secord (University of Nebraska), Dan Peppe (Baylor University), and Steve Brusatte (a PH.D. student at Columbia University and the American Museum of Natural History) to explore, in unprecedented detail, the changes in faunal and floral changes and how they might be related to local and global climate change. We also plan to examine the evolutionary radiation of mammals in western North America using this refined record and by applying new analytical techniques.

RKHF to TC: Can you tell us more about your Vertebrate Paleontology program at Carthage College?

RKHF to TW: Can you tell us more about your Vertebrate Paleontology program at the New Mexico Museum of Natural History and Science or your work with the University of New Mexico?

TW: As a Curator of Paleontology at the Museum, I am conducting an active field based research program. My primary research area is in the San Juan Basin of northwestern New Mexico and the most distant parts of this are within about a 3 hour drive of Albuquerque. Much of this land is on federal land administered by the Bureau of Land Management and I work closely with that agency to share data and coordinate fieldwork. I am also an Adjunct Assistant Professor at the University of New Mexico, Albuquerque. Some of my research has previously been funded by the National Science Foundation and the Bureau of Land Management.

As part of my research program, I collect fossils using a variety of methods. We employ screen washing to collect microvertebrates. Microvertebrates consist primarily of isolated teeth or jaw fragments. These are small enough that they are usually not collected by typical surface collecting techniques. Through screen washing we are finding many new or previously poorly known mammal specimens and this is greatly increasing our understanding of Cretaceous and Paleogene mammals of the San Juan Basin. We are also employing other collecting techniques and have had increasing success at recovering more complete vertebrate specimens. Over the past several years we have been very successful in collecting partial and nearly complete skeletons of mammals, reptiles, and other animals. These have greatly enriched our understanding of the morphology and biology, and evolutionary relationships of these animals.

Thanks to the Museum's collecting efforts over the past twenty years, it now holds the largest collection of vertebrate fossils from the San Juan Basin.

Lehman, T. M., and K. Carpenter. 1990. A partial skeleton of the tyrannosaurid dinosaur Aublysodon from the Upper Cretaceous of New Mexico. Journal of Paleontology 64:1026–1032.

Awesome interview! I enjoyed it and thanks!

We are fortunate enough to live in Albuquerque currently (my husband is military) and have access to such a great museum as far as dinosaurs are concerned because my oldest daughter, who will turn 7 next week, has been intently interested in them for over 3 years now and tells everyone she meets that she wants to be a paleontologist. Would you have any good suggestions about how I could best encourage her interests while we are here through any local programs that might be good for her age?

That is cool! You might check with the museums educator to see if they have any programs for her age group she could participate in. They would probably be your best local resource. I know the museum I work for (the Museum of Western Colorado) does digs in the summer that the public can participate on, and we are only an 8 hour drive away ;)