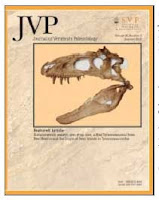 The featured article in the January 2010 issue of the Journal of Vertebrate Paleontology names a new species of tyrannosaur, Bistahieversor sealeyi (pronounced: bistah-he-ee-versor see-lee-eye), which was discovered in the Bisti/De-na-zin Wilderness of New Mexico. This research was conducted by two of my colleagues and friends, paleontologists Thomas Williamson of the New Mexico Museum of Natural History/University of New Mexico and Thomas Carr of Carthage College, who graciously agreed to let me interview them about their recent work. This is the first part of a two-part series. Tune in tomorrow for the second half.

RKHF to TW: Briefly tell us about your work prior to the discovery of Bistahieversor.

TW: The San Juan Basin contains a fantastic record of Late Cretaceous through early Eocene deposits. Vertebrate fossils have been collected from these deposits for well over 100 years. As a graduate student, I studied early Paleocene mammals and their stratigraphic distribution in these strata. After being hired by the New Mexico Museum of Natural and Science in 1994, I launched a vigorous field program to explore Cretaceous rocks in search of vertebrate fossils. This resulted in the recovery of numerous dinosaur specimens including a skull of Parasaurolophus (1995), a partial skeleton of a subadult tyrannosaur (1995), that is referred to Bistahieversor, a skull of a new pachycephalosaur, Sphaerotholus (1998), and the skull and skeleton of Bistahieversor (1998). Much of this work was conducted with the assistance of Museum Volunteers including Paul Sealey. He discovered the Sphaerotholus and the adult Bistahieversor specimens.

RKHF: Tell us about the discovery of Bistahieversor.

TW: Paul Sealey, a volunteer at the Museum who has worked with me for many years, found the specimen on a weekend trip to the Bisti/De-na-zin Wilderness back in 1997. He photographed it and showed the pictures to me. One of the pictures showed a dentary with a tooth. From that, I knew he had found a tyrannosaur. I worked with the BLM to obtain an excavation permit, the first ever issued for a paleontological excavation on Federal Wilderness (or so I've been told). I collected the specimen during the summer of 1998 with help from lots of volunteers. The New Mexico Army National Guard volunteered to lift the specimen from the wilderness as part of a training exercise in September of that year. Preparation on the specimen did not start until about 2001 and was completed in 2003. The specimen is now on exhibit in the Cretaceous Seacoast Exhibit at the New Mexico Museum of Natural History and Science.

[Photo: Group photo of Dr. Thomas Williamson (front row, standing in black t-shirt) with his crew with a field jacket containing portions of the holotype of Bistahieversor sealeyi in the Bisti/De-na-zin Wilderness Area of New Mexico (September, 1998). Photo by Ray Nelson.]

RKHF to TC: You are a renowned tyrannosaurus researcher - how did you become involved in this particular project?

TC: Tom Williamson invited me on board back at the Chicago SVP meeting in 1997. Some time before that he requested a copy of my Master’s thesis. On the strength of that, he wanted to work with me in writing up the juvenile specimen. The adult was discovered a short time after SVP, if I recall correctly.

RKHF: What formation was the Bisti Beast collected from and what is its age? Tell us a little about the world Bistahieversor would have lived in and what other types of animals it would have lived around - or eaten!

TW: Bistahieversor is from the Upper Cretaceous (upper Campanian) Hunter Wash Member, Kirtland Formation. The age is based on radiometric dates obtained from volcanic ashes above and below the fossil horizons as about 74 million years. This is slightly younger than most other late Campanian dinosaur faunas described from western North America - those tend to be closer to about 76 million years in age. The Hunter Wash Member represents an alluvial floodplain environment, inland from the western edge of the Western Interior Seaway. The San Juan Basin was a lush tropical forest at this time. The vertebrate fauna included abundant mammals, turtles, lizards, crocodilians, and dinosaurs. Dinosaurs included the hadrosaurs Kritosaurus and Parasaurolophus, the pachycephalosaur Stegoceras (Sphaerotholus is known from slightly younger deposits), the ceratopsian Pentaceratops, ankylosaurs, "raptors" such as Saurornitholestes and Dromaeosaurus (known primarily from teeth, but also from some foot bones), ornithomimids, and tyrannosaurs. Bistahieversor is the only tyrannosaur certainly identified from these rocks. However, previously some workers have incorrectly referred isolated teeth to Albertosaurus. It turns out that these dinosaurs cannot be distinguished by isolated teeth alone.

RKHF: What are some of the particular characteristics that make Bistahieversor unique and how do these characters compare to other known relatives of Bistahieversor? 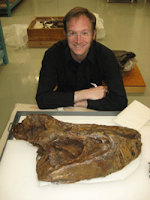 RKHF: Are there any obvious ontogenetic variations between the adult and "teenager" Bistahieversor specimens?

TC: The subadult specimen is referable to B. sealeyi based on the common possession of the supernumerary processes of the nasal that extend into the frontal and the single pneumatic opening in the palatine. As in tyrannosaurids, such as Albertosaurus libratus, Tyrannosaurus rex, Tyrannosaurus bataar, and Daspletosaurus sp., the subadult is delicately built, whereas the adult is much more massive; the internal sinuses are not inflated in the lacrimal, as they are in the adult; the lacrimal horn is small, whereas it is enlarged in the adult; and the palatine is not inflated as it is in the adult. Overall, the difference between the subadult and the adult are identical to those seen in other derived tyrannosauroids. However, some difference are not seen in tyrannosaurids, such as the subadult possessing an ectopterygoid that is inflated relative to the adult; in tyrannosaurids the reverse is true.

Lehman, T. M., and K. Carpenter. 1990. A partial skeleton of the tyrannosaurid dinosaur Aublysodon from the Upper Cretaceous of New Mexico. Journal of Paleontology 64:1026–1032.