Guest Post: Why it is wrong for Michigan State University to close Geological Sciences

There is a situation currently happening that I feel everyone needs to know about: Michigan State University closing their Geological Sciences program. And rather than writing it from second (or third) hand knowledge, I thought it would be better to go directly to a source that actually knows what is going on. I have asked my friend, and fellow paleontologist, Chris Noto to fill us in. Below are his words and thoughts on the situation. ~ ReBecca

Around the nation, many geoscience departments have been closed or threatened with closure. Furthermore, there exists a chronic shortage of trained geoscientists. This shortfall goes back over 20 years, following the collapse of oil and gas prices in the early 1980’s. But now, more than ever before, do we need the expertise of highly-trained professional geoscientists to help tackle wide-ranging global problems from climate change to the development of alternative energy resources. 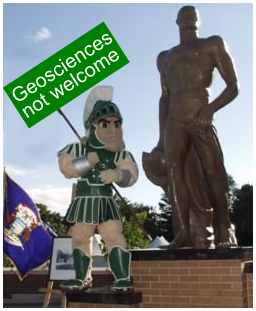 In light of this, one can imagine my shock when I was told that the administration of Michigan State University (MSU) is proposing to close the Department of Geological Sciences. All graduate and undergraduate programs in Earth Science, Environmental Geosciences, Geological Sciences, and Geophysics will be discontinued, effectively erasing the geosciences curricula from MSU. Currently the process has yet to be passed on to academic governance (Step 2b; for steps in the process see this, p. 7), which may happen as early as Dec. 11th. A final decision is not likely to be reached by the Board of Trustees until mid-spring, although there is no set timeline for the process. It is worth noting that the department was caught completely unawares by this decision. No preludes or evidence of disapproval had been made by the administration before this point.

The immediate impact of closing the department would affect the lives of 12 faculty, 50 graduate students, and many more undergraduates. The process of dismantling the department will take at least a few years to compete. Students would have up to three years to finish their degrees, but no new students will be accepted. There is no word on what will be done with non-tenured faculty, perhaps dismissed, and tenured faculty will be shuffled into other departments. Whether they would decide to stay after this time is an open question. Since the various programs administered by Geological Sciences will be discontinued, what classes would be available for the faculty to teach?

One wonders how MSU could justify purging a science considered a key element of its core mission as a premier public land-grant university in the United States. The following vague reasons have been given (based on this [p. 5] and this), each of which will be addressed below:

1. Other geoscience programs are available in Michigan--Undergrads usually do not choose a major until they are enrolled at an institution. Michigan state education standards lead to little exposure to the earth sciences, meaning fewer students entering college are interested in geosciences. It is unrealistic to expect students to choose a geology program before going to college. Instead of transferring, they simply won’t decide to major in it. This will only further decrease the number of students entering the field. Furthermore, there exist only 3 other PhD-granting programs in Michigan and a small number of Masters programs and those specializing in K-12 earth science education, leaving fewer options for students in the state. As a public land-grant school, MSU is obligated to offer classes in geological sciences as part of its curriculum.

2. Low student demand--This is one of the worst measurements of department performance, because students will go where they think there are jobs (think doctors). This attitude turns a major research university into little more than a vocational school catering to currently popular professions, not providing the liberal education it promises. In fact research by AGI shows that there will be a severe shortage of trained geoscientists in the next 10-20 years, meaning job opportunities and demand will go up, which should lead to an increase in student demand. In the future MSU could therefore lose students over time as they choose schools that still maintain geoscience programs.

3. Lack of research productivity, stature, and teaching--Geology at MSU is both nationally and internationally known for excellence in research. Faculty continue to publish high-impact articles across the spectrum of the discipline. Much of this research takes part through collaborations with colleagues in other departments and institutions. The pace of geoscience research does not match other sciences, taking years in some cases to collect necessary data, thus making it a poor measure of performance. This should not decrease the importance of the research nor diminish the stature of the faculty. Two faculty were recently elected fellows of the Geological Society of America, a sign of their long and distinguished contributions to the field. Many faculty have won both campus and external teaching awards.

4. Low extramural grant support--The faculty of Geology regularly obtain external funding, a total of 44 grants since 2004, from such prestigious places as NSF, NOAA, NASA, the National Geographic Society, and the U.S. Department of Energy. Students are regularly awarded grants and awards as well. The move to close Geology will likely cost MSU future grant revenues through loss of prestige and inability to capitalize on emerging funding opportunities.

5. Outreach--Members of Geology help organize and participate in Darwin Day festivities each year. This is an event that I have personally participated in and can attest to its impact on science outreach for the community. I have observed both faculty and students enthusiastically interacting with hundreds of children, students, and adults, raising their awareness of science and its importance to their life. Members of the department also participate in a summer Fossil Camp that reaches many young children, educating them about earth sciences. Will these programs survive at MSU in the absence of Geology?

6. Cost savings--Faculty pay tends to make up the bulk of many departmental budgets. The number of full-time faculty in Geology is relatively small. Since a large proportion of the faculty are tenured they will be moved to other departments and continue to draw a salary (assuming they all decide to stay). Even if all these faculty lines were eliminated the cost savings would be peanuts to the university’s budget. Therefore, this move will not save much money, despite the claim that drastic measures need to be taken in the short-term to reduce operating costs without raising tuition.

The attitude that Geological Sciences needs to close appears strong among administrators, so it seems unlikely that even in a best-case scenario the department will survive unscathed. As such, those of us concerned about the future of the department should urge the MSU administration to explore less extreme alternatives which do not completely strip geosciences from the school. One alternative could be to merge the department with an overlapping discipline, such as Geography, to form a new, composite department. This is already being proposed for other departments at MSU, why not Geology? This would reduce administrative costs, and if coupled with a hiring freeze, perhaps save as much if the department was simply closed. Obviously there is no simple answer, but the department deserves a chance to reorganize and reimagine itself to come in line with the university’s needs before the final decision is made to close it.

In the end, the actions of MSU administration appear to represent a cynical decision at odds with its own educational and research missions. There is no argument that financial problems at MSU and in the state are at an all-time high, however moving to close Geological Sciences as an answer to this problem would be like cutting off a good leg because of a bad toe. It’s only going to slow you down in the future, even if it felt right at the time. This move could cripple the capacity for Michigan State University to remain at the forefront of emerging sciences and in tackling large, interdisciplinary problems such as climate change and renewable energy. But there is still time: if we act now, we may be able to prevent this travesty.

As a final note, if this decision goes through, let this serve as a warning to all geoscience programs in US schools: MSU is one of the largest schools in the nation and if they think they can do without a geology program, other schools may follow suit. A dangerous precedent is being set, which could have devastating consequences to American science in the long-term. As geoscientists we must fight to increase our profile both within and outside of our universities and build political ties to prevent such cynical and dismissive attitudes towards the importance of our science in both education and to society.

Want to get involved? Please pass along word to people you know, especially those in high-profile and influential positions. An online petition has been set up here and there is a Facebook group with more information here (see the discussion board), including contact information for university administrators. Writing letters to the dean, provost, president and board of trustees are all encouraged.

The author is a Visiting Professor in the Biomedical Sciences Department at Grand Valley State University. The views expressed here are his alone and do not represent those of his employer. He can be reached at notoc@gvsu.edu. Please feel free to use these points when contacting MSU administration and help spread the word.

I am a recent alumna of the MSU Geology Department and currently pursuing a graduate degree at the University of Illinois. I can attest to the level of education upheld in MSU's department and it has served me well at a Top 40 physical sciences university.

I'd like to thank you for this post. I'm planning on speaking with any administrators that I can next week when my Thanksgiving/Fall Break kicks in. It would be wrong not to protest this as hard as we can.

Please see today's post with an update on the situation.

I received my letter today telling me that MSU will be closing the Department of Geology. It was like being told one of my family members had just died. I couldn't believe it. Total shock. Did some research on the website that the letter suggested and I couldn't believe that they are completely cutting this department, it's programs (BS, MS, and PH.D) while other departments are basically just contributing just enough to get by. I wanted to send my children to my alma mater but I've just changed my mind. Why would I send my 3 kids to MSU when in just a few years, any degree they would earn would be worthless b/c their department was just canned. MSU made my decision easy...no way will I send them to MSU.

Well, it's not a done deal yet. There is still time to convince the admin that geology must be saved. Everyone should be writing letters and sending them in.