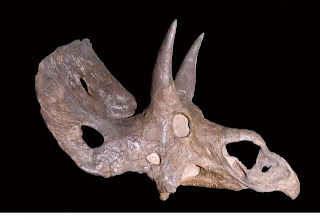 Another twist in the name change of Diceratops (see my previous post on this). The ceratopsian name 'Diceratops' (Lull, 1905) was preoccupied by a member of the Hymenoptera insects. In early 2008 Octavio Mateus published a name change in the genus of the ceratopsian Diceratops to Diceratus.

A paper was brought to my attention today, in which a Russian researcher, Andrey Ukrainsky, claims that two names, Diceratus Mateus (March 1, 2008) and Nedoceratops Ukrainsky (December 20, 2007), were independently proposed for Diceratops. Due to the principle of priority, Ukrainsky is claiming the priority for Nedoceratops (Ukrainsky 2009). I have not been able to get a copy of the 2007 Ukrainsky paper at this time (I have written and asked for a copy), but in his 2009 paper he acknowledges I. M. Kerzhner for the immediate publication of his 2007 paper. The 2008 Mateus paper was accepted on May 29, 2007.

It appears that this is another case of nomenclatural coincidence where the two authors were working on the same thing at the same time with out and knowledge of what the other was doing. The journal where Ukrainsky published his 2007 paper, Zoosystematica Rossica, does exist, but for some reason has not updated their website in quite some time, so I can not confirm the publication of the paper on their website. That seems odd. It is too bad that Ukrainsky did not choose to publish this paper in a more high profile journal (no offense to Ukrainsky or Zoosys. Ross, but I had never heard of the journal until today) and/or publicize and bring attention to this change.

Thanks to those who have already spoken with me about this. What are the other thoughts out there regarding this?

"Ned" as in "Flanders"? Anyone have an idea on the etymology behind this?

Hopefully more like Colbert, but I have no idea.

I just checked the reference; it is very short and says virtually nothing, but the etymology is "from the Russian prefix 'Nedo' meaning insufficiency". Why Diceratops is insufficient isn't made clear, but the author is an entomologist so perhaps it is another Megapnosaurus...

I'm very keen to see Ukrainsky's articles but, so far as I can tell, Nedoceratops is now the name we should use. I recently changed a book manuscript to incorporate Diceratus: luckily I have time to now change it again. The down side is that I might have to explain this mess, given that no reader will know what Nedoceratops is.

Thanks for checking the reference Richard. That is a rather derogatory name. Why didn't he just let someone who works on ceratopsians rename it it he thinks it is "insufficient."

If Ukrainsky sends me a copy of the paper Darren I will fwd it to you. I already have a paper with Diceratus published in it now.

I'll make a PDF tomorrow, and send it to you both if you would like it.

YES! That would be great. Thank you for the offer.

Why the name "Nedoceratops?" Sounds like a ceratopsian name game to me. LOL!

I saw that specimen at the Smithsonian. So it is a valid genus? Well the name changes don't help. And I'm with Darren, I hope it isn't named after Colbert.

Why is it "bad" that three dinosaurs (only two of them valid) are named after Ned Colbert? Dong Zhiming has about six now.

Well isn't that appropriate. It would be just like an Ichneumon wasp to parasitize something. In this case a name. :)

Tell me about it Frank!