A new paper coming out on Monday (the 15th of February) in the journal PLoS One will present innovative details of the feathers of Microraptor gui. Dr David Hone, a British researcher working in China, and who is also the author of the blog Archosaur Musings and runs Ask a Biologist, is the lead researcher on this study, where the best preserved fossil of Microraptor were studied under UV light. They observed that while the feathers do indeed reach the bones as expected, they are covered by the remains of decayed soft tissues and so cannot be seen under natural light. Their study shows that the feathers of Microraptor were larger than originally thought and that they have not moved from their original positions, but are preserved in a natural position in the fossil. Dr. Hone graciously agreed to let me ask him some questions about this current research:


RKHF: Where did the idea to use a UV light to detect the furthest reaches of the feathers on Microraptor originate? What are the mechanics behind it that make it work?

DH: Well the idea was not so much to find the feathers as to see what was there. Helmut Tischlinger's work with UV light on the various fossils of the Solnhofen limestones in Germany (that give us things like Archaeopteryx) have often recovered 'hidden' information. Parts of the fossils that are not clear or even visible at all under natural light, but then can be seen clearly under UV. We simply hoped the same might be true of the Lianoning specimens we have in China, so I was able to persuade my colleagues here to fund a trip to Beijing for Helmut for some initial investigations. It was chance in a sense that we found the missing feathers in Microraptor - this was after all the first time someone had seriously looked at the Liaoning stuff like this and the preservation is rather different, it may not have worked at all, or may have taken weeks to get the set-up just right. As it was, Helmut fairly quickly found a few features on various fossils, obviously including some nice bits on Microraptor. 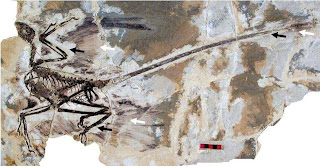 Microraptor gui (holotype specimen) under natural light showing the feathers (white arrows) and ‘halo’ (black arrows). Image from Xu Xing.
The mechanics are fairly simple in that we basically just shine some very powerful UV lights at the fossil and take photos. However, that process can take hours or days to get a good image. Different parts of the fossil bones, soft tissues and the rock itself will reflect or fluoresce differently according to the wavelengths of the light being used and the filters added to the camera. It can take dozens of shots to get a good one (assuming something is even there) and some of the exposures take an hour or more. It therefore takes a lot of time, skill, patience and especially experience to get these results. In a sense we are fortunate we got so much so soon - Helmut tells me that it often takes a week or more working on a single fossil to get results he's really happy with and with all the likely details found. Here we had less than two weeks and dozens of specimens to work on, so it's fortunate we have as much as we do.

Microraptor gui under UV light showing the differences in colour of the bones, feathers and degraded soft tissues. Image from Helmut Tischlinger.

RKHF: Is the soft tissue identifiable?

DH: Not really. It's patchy and very varied which is why we think that it was preserved well after it began to decay. In some fossils you can see blocks that can be readily identified as muscles or scales etc. but not here. We just have some loose patches of very brightly fluorescing tissues.


RKHF: Are there any differences between the arm and leg feather implantation sites on Microraptor? Do the leg feathers appear to be flight related? 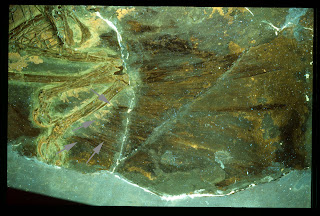 DH: Well unfortunately it's only in a few key places that you can really see the attachment points penetrating the 'halo' on the specimens and the arms are no part of that. So while we can fairly safely infer that the arm feathers are there and do reach the bones (picture to right), we can't observe it directly (at least not yet, more work might yet reveal them). This also means we can't really compare them to the leg feathers in terms of attachment, though having deep arm feather attachments is no surprise at all, and really it's probably better that we can really confirm the same is true of the legs.

I suppose that the fact that the leg feathers do have bone-deep attachments could be used as an argument that they are used in flight. However, the asymmetry of these feathers is a far more important character and we can't really add anything to the previous work in that respect.


RKHF: Has this technique been used on any other fossil genera at this time or only Microraptor? 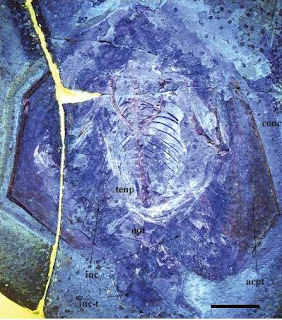 DH: A great many things have been examined under UV. I've posted up various photos of different specimens of Archaeopteryx on my blog, and other dinosaurs like Compsognathus and Juravenator have been published on and of course pterosaurs like Jeholopterus (pictured right from Kellner et al. 2009), Pterodactylus and Anuroganthus and a fair few others. However, most of the work has been directed at invertebrates as the contrast between the shells and rock is often not great under normal light, but superb under UV which really helps show up their detailed structure. UV light work has been going on for decades but few people do much of it, and with the cost of colour photos often only a few minor images are published, or the results are simply used to help improve a description. As such even within scientific circles this work is not too well known, something I hope will change.


RKHF: How many specimens of Microraptor did you analyze?

DH: Just the one unfortunately. When Helmut was here he had a limited amount of time to work on as many specimens as possible. The exceptional preservation of the holotype, even next to other Liaoning material, made it a prime candidate, but we didn't look at other Microraptors. I guess I should add the word 'yet' to that sentence as we fully intend to, but of course time and money constraints make that much easier said than done for the short-term at least.


RKHF: Is there something about the preservation or sediment type found in the Solnhofen, Yixian and Daohugou formations that makes the use of this specific technique more successful than you would find in other locations? For instance, do you think an environment like that preserved in the ancient lake beds found in the Green River Formation of the United States could benefit from similar studies?

DH: Well certainly all of these formations are Lagerstatt-like so they are preserving things in a fairly similar way. It's also true that the Yixian and Daohugou are really quite different to the Solnhofen and while studies of the former have been looked at much less than the latter they have things in common. My background is zoology not geology, but the few Green River specimens I've seen look much more like the Solnhofen than they do the Chinese beds, so I would say hopes are high. The Green River often preserves things in superb detail and with soft-tissues so I'd be surprised if *nothing * was there. It's well worth a good look one day at some of the better birds or fish for example, just as a better look at some of the pterosaur material from Brazil.


RKHF: Have the methods, techniques or conclusions learned from this project led to any other new research projects?

DH: Well it's a bit early to say. Certainly there are a bunch of slides knocking around the IVPP with various UV pictures on them that other people are working on (slowly) so in a sense there will be a follow-up to this. I've certainly developed a greater interest in feathers so I'll be looking into that more if I ever clear the mountain of papers off my desk to get that far. Obviously there are a great many important and interesting fossils in China and elsewhere that could benefit from being examined with UV and slowly more and more of this is being done. There's lots more to find, but it will take a while. 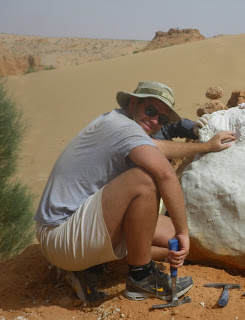 DH: Well I think the real message here is less about what can be said about Microraptor (cool though that is) and more what it means for fossil preservation and preparation. There really is genuine information 'hidden' in fossils and we need UV light and other techniques to bring this out. If we don't (and few people do) we risk missing out on all kinds of rare and valuable soft-tissue information and even destroying it during preparation while exposing the bones. This is obviously really critical and something more people need to be aware of.

The holotype of the theropod non-avian dinosaur Microraptor gui from the Early Cretaceous of China shows extensive preservation of feathers in a halo around the body and with flight feathers associated with both the fore and hindlimbs. It has been questioned as to whether or not the feathers did extend into the halo to reach the body, or had disassociated and moved before preservation. This taxon has important implications for the origin of flight in birds and the possibility of a four-winged gliding phase.

Examination of the specimen under ultraviolet light reveals that these feathers actually reach the body of the animal and were not disassociated from the bones. Instead they may have been chemically altered by the body tissues of the animal meaning that they did not carbonize close into the animal or more likely were covered by other decaying tissue, though evidence of their presence remains.

These UV images show that the feathers preserved on the slab are genuinely associated with the skeleton and that their arrangement and orientation is likely correct. The methods used here to reveal hidden features of the specimen may be applicable to other specimens from the fossil beds of Liaoning that produced Microraptor.

[David Hone wrote: There really is genuine information 'hidden' in fossils and we need UV light and other techniques to bring this out. If we don't (and few people do) we risk missing out on all kinds of rare and valuable soft-tissue information and even destroying it during preparation while exposing the bones. This is obviously really critical and something more people need to be aware of. ]

I agree. There are a lot of potential techniques which could be used to explore these types of material and prep work can be very dangerous on material. There is a lot of benefit to xray CT scanning (and microCT scanning for smaller fossils) before extensive prep is carried out. Even prep methods which can produce beautiful results like acid prepping, that can make it harder to examine non-hard tissue areas when CT scanning after that material has been prepped.

I have a paper in press (slated for this summer) which redescribes material which was prepped somewhat badly in places, though that was done in the early 20th century so perhaps it is understandable. :(

Amazing how much technology is expanding knowledge of fossil critters.