I have. And today hell froze over. That's right, my first paper in a journal that people actually read was published today!

Hunt, ReBecca K. and Thomas M. Lehman. 2008. Attributes of the ceratopsian dinosaur Torosaurus, and new material from the Javelina Formation (Maastrichtian) of Texas. Journal of Paleontology 82(6): 1127-1138.

Excuse me for just a moment....

Sorry, I had to get that out of my system!

This is how I feel right now:


Symbolism anyone? Yes, Vader is this project. Its all about getting it out of your system and being able to let it go and move on to the next thing. Having this paper finished and actually published is quite the relief.

That being said, I will post a pretty picture from the paper here along with the abstract and I will discuss the paper more at length when I have had time to calm down some.

ABSTRACT—A bone bed in the middle part of the Javelina Formation (Maastrichtian) in Texas yielded parts of about 37 identifiable ceratopsid dinosaur bones, mostly appendicular and limb girdle elements belonging to one juvenile and two adult individuals of Torosaurus cf. utahensis. The bone bed is a lag assemblage comprising large immobile parts of the skeletons accumulated in an abandoned stream channel. In general form and proportions the postcranial bones are similar to those in Pentaceratops sternbergi and are not as robust as those in Torosaurus latus or Triceratops horridus. A few cranial elements are preserved, including parts of a parietal, squamosal, maxilla, and two dentaries. The form of the parietal fragment is comparable to that of a more nearly complete specimen of Torosaurus cf. utahensis collected nearby at about the same stratigraphic level. The bone bed material provides a basis for the first skeletal reconstruction of this enigmatic horned dinosaur. Most characters used in diagnoses of T. utahensis and T. latus are inadequate. Only the raised bar along the squamosal/parietal suture, present in T. latus; and the midline epiparietal, absent in T. latus, may discriminate the two species. 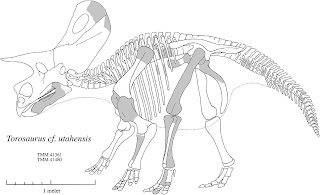 Posted by ReBecca Hunt-Foster at 2:35 PM

Total congratulations - and it looks like a great celebration! Yippie!

Congrats, author! You have just joined the rank of Serious Scientist! Now you can lord it over all the rest of the rank amateurs at SVP next year!

Don, you crack me up! I am looking forward to actually having something to donate to the student reprint exchange finally! Yippee!

Congratulations! The first of many, I'm sure.

Congratulations!
I know the wait can be interminable but it is totally worth it in the end.

Does sound like an interesting paper. Been quite the couple years for Ceratopsians, good to see Torosaurus isn't getting left behind!

Thank you all :D

Congrats. It is always amazing how good it feels to have a research paper finally out and out of your system; no more reviews, revisions, or corrections. I don't think that feeling ever fails to appear no matter how many times you publish. Maybe some of the senior scientists who view this blog can confirm.

Hi Bill. I am glad to hear that it is always like this. It is quite a nice feeling. I will send you a PDF, of course. Thanks for your interest :)